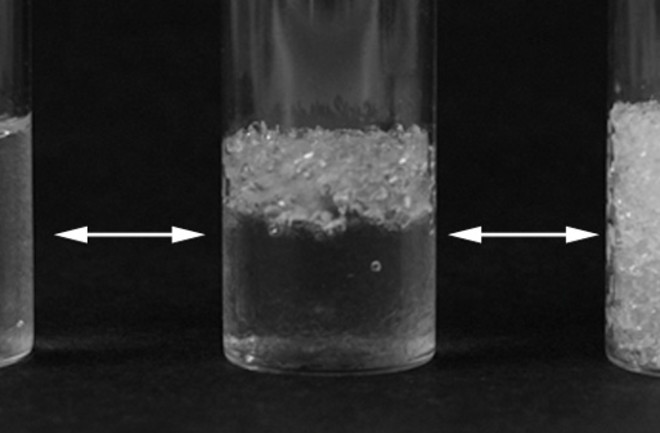 Plant researchers who want to study the roots of growing plants have a problem: Those roots are obscured by the soil in which the plant grows. But no more hiding. Now researchers have designed a transparent soil that lets them look at not only roots but also the microbes, good and bad, that colonize them. The transparent soil is made of a synthetic polymer called Nafion. (When not lending itself to soil research, Nafion is often used in applications batteries and fuel cells---unlike most polymers, it conducts electricity.) The polymer particles are opaque and slightly reflective on their own, but with the addition of a water-based solution, they become clear. For these experiments, the researchers first soaked the Nafion in mineral-rich medium, which the polymer absorbed. In this clear soil, the scientists then planted seedlings of lettuce, maize, tobacco, barley, and alfalfa, which thrived in the artificial earth. The research team also used the system to watch a fluorescently labeled strain of E. coli infect the roots of lettuce plants, giving them a clear view of how the microbe took hold. Such experiments could help scientists better combat soil pathogens that threaten the food supply. Other research teams have developed differenttypes of clear soil as well, letting them peer at a variety of plants below ground. In the animal realm, scientists have come up with a way to make embryos transparent so that they can see its structures that would normally be hidden. The see-through embryos relied not on an artificial, clear medium but on a solution that makes opaque tissue transparent. Though the ingredients are different in the two experiments, the similarities are clear.