Choose your cutlery carefully: what you eat with changes how food tastes 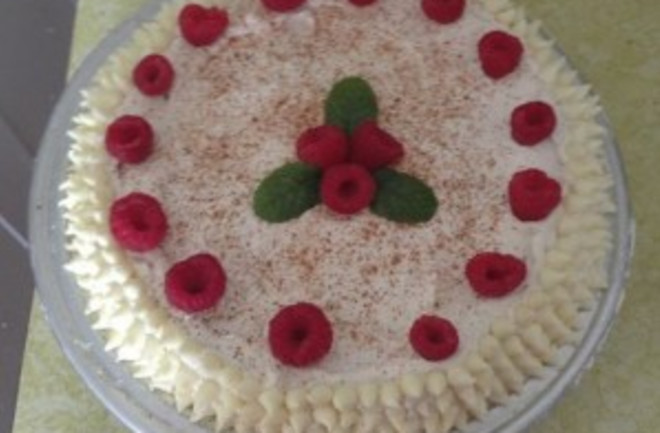 My dessert competition entry for my workplace Christmas party last year: eggnog cheesecake. The tough judges from HIMB, like those on TV cooking shows, were scoring looks as well as taste, so I had to go all out! I have a particular fondness for cooking competitions. Whether it be Iron Chef (the original and the American spinoff), Cupcake Wars or Chopped, once the burners are lit, I can't seem to look away. Over time, I've come to notice that all cooking shows tend to incorporate the same elements when it comes to judging. Taste, of course, is paramount. Creativity and surprise seems to rank high as well. But almost as important as the dish itself, whether a chef is competing in Hell's Kitchen or on Top Chef, is how it looks. Called presentation or plating, it incorporates everything from the colors of the food to what dish, bowl or glass it's served in. Don't get me wrong — I like pretty things. Some of the stuff these chefs whip up could just as easily belong in the Louvre as on my dinner table. But I never really understood why presentation is so important. Who cares if it looks like Alpo if it tastes delicious? I simply didn't get the obsession with the visual — until, that is, I began to read the research of scientists like Vanessa Harrar and Charles Spence. Taste, they have found, is in the eye, ear, and hand of the beholder. In a study published today in the open access journal Flavour, Harrar and Spence show that even something as overlooked as our cutlery can change our perception of foods. Scientists have long known that our sense of smell is vital to our perception of flavors. Now, they're finding that our other senses — touch, hearing and sight — also weigh in. Did you know, for example, that foods taste blander in noisy environments? Or that we perceive sweet popcorn as saltier if we eat it from a colored bowl? Or that the weight of the dish food is served in can alter how tasty and expensive we think it is?

The diversity of utensils used in the three experiments. a) The five differently sized and weighted spoons in Experiment 1. b) The five colored spoons and the yogurt used in Experiment 2. c) The cutlery and cheese used in Experiment 3, as presented to the participants (though they only saw one piece of cutlery at a time). Figure from Harrar & Spence, 2013. The spoon or fork you choose to eat with might seem like an unimportant choice, but Harrar and Spence don't take any gustatory decisions lightly. In a set of three experiments, they tested how eating with different utensils changes how we perceive our food. In Experiment 1, they altered the weight and size of spoons as well as the 'fanciness', then asked participants to rate the density, expensiveness, and sweetness of each yogurt (really all the same yogurt, being eaten with different spoons). In Experiment 2, they took the same yogurt, dyed some of it pink, and had participants taste using red, blue, green, white, or black spoons that were otherwise identical in size and shape. Lastly, in Experiment 3, the scientists had participants try two types of cheese using forks, spoons, knives and toothpicks, to see if the instrument used affected their perception of flavor. Eating with a heavy spoon made participants feel the yogurt was cheaper, less dense, and generally less likeable, even though they rated it as sweeter. Literally, the feel of a spoonful of yogurt altered how rich the yogurt tasted. The authors suggest that this was in part due to prior expectations: because plastic spoons are usually light, the heavier spoons clashed with expectations, and that mental discontinuity affected the taste of the food itself. Touch wasn't the only sense meddling with taste. Though the participants couldn't tell the pink and white yogurts apart when blindfolded, they thought that both were saltier when eaten off a blue spoon as opposed to any other color. When eaten off of white spoons, the yogurts were sweeter than when eaten off of black spoons. Contrast between the food and the spoon also mattered — the white yogurt tasted sweeter and more expensive when eaten off the white spoon as opposed to a black one, but the reverse was found for the pink yogurt. But perhaps the most interesting result came from comparing the taste of cheeses from different utensils. While eating with a spoon instead of a fork had no effect, the participants found the cheeses tasted saltier when eaten directly off a knife. "Knives are not usually inserted into one’s mouth, but during this experiment the participants were explicitly instructed to put each of the items of cutlery into their mouths to keep circumstances consistent," explain the authors. This unusual behavior might have caused the change in taste perception. The authors also note that cheese shops tend to serve tastes right off the knife, and since these specialty shops tend to serve more aged (and thus saltier) cheeses, it's also possible that previous experience and expectation of saltiness associated with knives influenced the participants' taste buds. The take home message, of course, is that when it comes to taste, it's not just about our mouths. “How we experience food is a multisensory experience involving taste, feel of the food in our mouths, aroma, and the feasting of our eyes," explain the authors. "Even before we put food into our mouths our brains have made a judgment about it, which affects our overall experience.” “Subtly changing eating implements and tableware can affect how pleasurable, or filling, food appears," says lead author Vanessa Harrar. Big food brands, of course, love this kind of research because it helps them try and convince consumers to choose their products using subconscious preferences. But they're not the only ones that can benefit from such research. Results like these can be used for good. "People may be able to make better food choices if their ingrained color associations are disrupted by less constant advertising and packaging,” says Harrar. Not only that, we may be able to use our influences to our advantage. For example, we might be able to design dinnerware that promotes lower sodium intake by boosting the perceived saltiness of foods through color, shape or texture. Or, for those inclined to overeat, knowing simple tricks like how we consume less when we eat from smaller dishes can help control unhealthy urges. As for me, I'll never question the weight chefs place on perfect plating again. Citation: