Chocolate Was A Thing 1,500 Years Earlier Than Thought 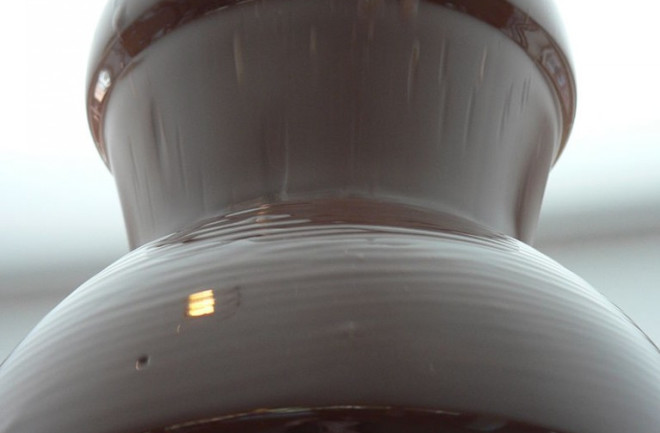 Millennia before chocolate fountains (above) were mainstays at wedding receptions, the cacao-derived ingredient was important to people living in Central and South America. (Credit: Wikimedia Commons) It's time to rewrite the history of chocolate. Using both archaeological and genomic data, researchers have revealed that consumption of the now globally-loved ingredient started much earlier than thought — and has a different birthplace than many assumed. Chocolate is a product of the cultivated cacao tree (Theobroma cacao), and evidence of both cacao domestication and chocolate use have been centered around Central America and Mexico. Found at sites and documented in numerous texts, chocolate — usually consumed as a drink or gruel — played a key role in several regional cultures going back about 3,900 years. Additional archaeological material suggests it spread to the American Southwest by about 1,000 years ago. Based on the existing evidence, including the ingredient's cultural significance, it was long thought that cacao domestication and chocolate production originated in Mesoamerica less than 4,000 years ago. Today, however, a multidisciplinary team makes a compelling case — with multiple lines of evidence — for chocolate use going back almost 5,500 years, not in Mexico or Central America, but in South America, in the upper Amazon. Chocolate Leaves Its Mark The team recovered starch grains and other organic residues from ceramic and stone artifacts at the archaeological site of Santa Ana-La Florida (SALF) in southeast Ecuador. Analysis revealed the material was from both cultivated Theobroma and its wild relative Herrania, dated to be 5,300-5,400 years old. The discovery is not only the world's earliest example of cacao use but also the first directly dated archaeological evidence of its use in South America. Having archaeological proof of chocolate's very early use in the region is important but not shocking to scientists who study the area's present and past. Numerous ethnographic sources report widespread use of both Theobroma and Herrania products in traditional medicine, food and drink. SALF, where the grains and residue were found, is the earliest known site belonging to the Mayo-Chinchipe culture, which covered parts of both modern-day Ecuador and Peru. The site was discovered in 2002 and has yielded shells and other evidence that the Mayo-Chinchipe people traded with other regional groups. It's possible SALF and the Mayo-Chinchipe were part of a trade network that eventually brought cultivated Theobroma and chocolate northward into Mesoamerica. The Original Sweet Spot Some of the recovered Theobroma and Herrania material from the SALF site yielded ancient DNA, which the researchers compared to previously collected genetic samples from both genera. Most of the 22 known Theobroma species, and Herrania's 17, are native to the upper Amazon; that's also where samples of T. cacao in particular have the highest genetic diversity. Those are both big clues that paleogeneticists look for when zeroing in on where a genus or species originated. The team's findings make a strong case for T. cacao first being cultivated in the upper Amazon of northwestern South America.

Today's study identified the greatest genetic diversity for Theobroma species,and specifically T. cacao (domesticated cacao), in the upper Amazon. That's close to the SALF site in Ecuador, where artifacts contained residue that points to the earliest known use of T. cacao's crop, chocolate. (Credit: Zarrillo et al 2018) Genetic analysis also showed that the ancient plants found at SALF were more closely related to ancient cacao plants in Central America than to the modern cacao varieties currently cultivated near the archaeological site. That's one more piece of evidence that points to an ancient cacao network moving early cultivars throughout northern South America, Central America and Mexico. History, Not Hershey's Of course, the chocolate consumed at SALF likely had little in common with the gooey, chewy, crackly, syrupy, crunchy, sugar-laden permutations sitting in the nearest vending machine (and convenience store shelf, and grocery check-out line and... well, pretty much everywhere). It's unclear how the Mayo-Chinchipe preferred their chocolate, but the residues were found in a variety of vessels that had both ritual and routine function. It appears that, while chocolate may not have occupied quite so lofty a place in the local culture as it did later in Mesoamerica ("food of the gods" and all that), the ingredient was more broadly used, both ceremonially and as an everyday snack. The study appears today in Nature Ecology & Evolution.

Chocoholics will probably want to celebrate today's news with a truffle or ten. Have at it. Better you than me. (Wikimedia Commons)