Chimps Know Death When They See It 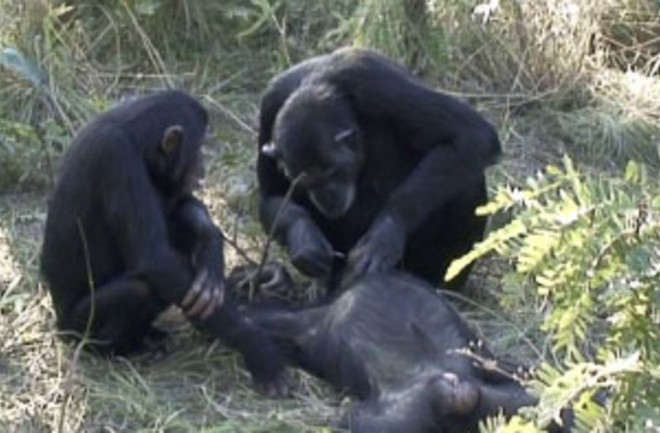 Noel, a chimpanzee, used a grass stem to pick debris from the teeth of a dead chimp in a sanctuary in Zambia. (van Leeuwen, Cronin, and Haun; Scientific Reports Volume 7, March 2017)

After Rosie’s mother died, she accompanied the lifeless body throughout the night, in apparent mourning. When Noel lost her adopted son, she picked his teeth clean with a grass stem. And Jire carried her infant’s corpse for 68 days after the one-year-old succumbed to a respiratory infection.

Rosie, Noel and Jire are chimpanzees, whose responses to death were documented by researchers. Their behavior makes one wonder: Do chimps and other animals understand death, or are humans the only species conscious of mortality?

To completely answer this, we’d need to read animal minds. Short of that, scientists try to infer animals’ inner thoughts from their outward behaviors. Based on such observations, here’s what we know, about what chimps know, about death.

How Animals Deal with Death

Some animals treat the corpses of community members in specific ways. For example, in social insects, like ants and termites, the dead are eaten, buried or removed from the colony, depending on the cause and context of the death. Corvid birds, including magpies and crows, gather around their deceased, as if having a funeral. And mothers have been seen carrying dead infants for hours to weeks in diverse species, like elephants, whales and dingos. But it’s

unclear from these behaviors exactly how these animals conceive death.

If any creature gets death, it may be chimpanzees. The two species, common chimpanzees (Pan troglodytes) and bonobos (Pan paniscus), are our closest evolutionary relatives, sharing ancestors with humans roughly 8 million years ago. And some of the cognitive abilities humans use to understand death might have existed in this common ancestor and been retained through both human and chimp evolution.

Back in 1973, anthropologist Gez Teleki published the first account of wild chimps reacting to an accidental death. He recounted the aftermath of a chimp’s fatal fall from a tree in Tanzania. The 16 group-members present erupted into “raucous calling … slapping and stamping the ground, tearing and dragging vegetation, and throwing large stones.” Individuals frantically embraced one another (and two copulated), before the group eventually calmed and abandoned the scene.

Since then, more reports of chimp behaviors surrounding death have slowly accumulated, especially in the past decade. “Almost every new observation can help us to build some kind of picture of what’s going on,” says James Anderson, a psychologist who has worked to establish Pan thanatology, the scientific study of death among chimps.

Chimps inspect the corpse of one of their group members (Credit: van Leeuwen et al; American Journal of Primatology Volume 78, 2016)

The compiled observations reveal a variety of behaviors. When witnessing death of their own kind, chimps have responded with everything from agitated frenzy to quiet contemplation, embodied by watching, sniffing and prodding the corpse. In some cases, chimps have tenderly groomed the bodies or covered them with plants. In other cases they’ve attacked and cannibalized them. One bonobo mom groomed her dead infant immediately before eating it with other members of the group. As primatologists Watson and Matsuzawa put it, “the juxtaposition of care and cannibalism is puzzling.” Indeed.

Thoughts Behind the Behaviors

Considering chimps behave so variably towards death, can we make any generalizations about their understanding of it? Like human children, chimps probably learn about death. But unlike children, who can be told about death, chimps must learn from direct observations. Therefore, chimps’ variable responses are likely due to their differing prior experiences as well as relationships to the deceased.

But there may be a limit to what chimps can learn about death. To assess that limit, Anderson considered four concepts that human kids must grasp in order to understand death: the ideas that dead individuals cannot think or feel (non-functionality), and that state is permanent (irreversibility), inevitable (universality) and due to a specific cause (causality).

After reviewing behavioral observations, Anderson contends mature and experienced chimps can grasp death’s irreversibility and non-functionality. “I think they are clearly capable of understanding that these dead individuals aren’t going to suddenly come back to life, and they cannot feel or hear or see anything, regardless of what gets done to them,” says Anderson, a professor at Kyoto University, Japan.

Supporting this conclusion is the fact that chimpanzees deliberately kill other animals and other chimps. Furthermore, chimps in Côte d’Ivoire have been seen grooming and licking wounds of injured, but not dead, companions.

Regarding causality, they likely understand violent deaths, especially the ones they inflict on other animals. There’s no evidence chimps comprehend invisible causes of death, such as disease and old age.

Universality is the most difficult component to judge from behavior. Anderson makes the distinction between can and will: chimps seem to understand that animals can die, but it’s unclear if they know all animals — including themselves — will die.

“How can we ask them, ‘do you know that every individual is going to die?’” says Anderson.

For better or worse, humans may be the only animals that do know this.