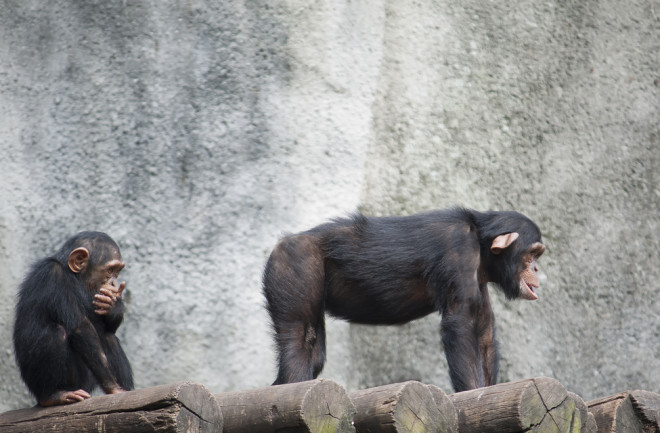 (Credit: AJancso/Shutterstock) Chimpanzees may look at each other's butts the same way we look at faces. A pair of researchers from Leiden University in the Netherlands and Kyoto University in Japan studied how chimps process images of other chimps' rear ends, and found that they perceive them in the same way that we do faces. Chimps seem unable to recognize posteriors well when they are flipped upside down. Humans experience the same difficulty — what's called an inversion effect — when looking at faces.

Our ability to recognize faces is deeply ingrained in our consciousness, and seems to be present nearly from birth. Telling people apart from each other enables some of the most basic components of social interactions, so it makes sense that we come prepared to do so. How we use subtle clues to differentiate our mothers from complete strangers is still a point of debate, but it seems that we go beyond merely recognizing that mom's nose looks different than everybody else's. Researchers call this configural recognition, and it essentially means that, to us, a face is something more than just a collection of features. Over the years, this theory has been tested by a series of studies that challenge participants to identify faces that have been flipped upside down. It turns out that we're not so good at recognizing inverted faces. When confronted with an upside-down face, we must rely on specific features — eyes, nose or lips — to recognize it, instead of relying on its inherent "faceness" like we usually do. The researchers extended this theory to chimpanzees, and to their butts specifically. While chimps do look each other in the face, their four-limbed lifestyle means that their posteriors stick out, literally and figuratively, much more than ours do. When female chimpanzees are ovulating, their behinds swell up and take on a red tint, broadcasting their fertility to males. For males, being able to recognize a female's butt would be a big advantage, both because it makes identifying females in heat easier, and helps to avoid inbreeding.

Assumptions Make An About Face

To see if their theory was correct, the researchers set up an experiment testing both humans and chimpanzees to see how well they recognized each other based on their assets. Their tests on humans came out as expected — people are worse at recognizing faces when they're turned upside down. Unsurprisingly, turning the pictures of butts upside down didn't change reaction times much, just what we would expect if humans aren't conditioned to recognize specific behinds. Working with the chimpanzees, however, the researchers found that they got a lot slower at recognizing the butts when they were flipped around — the same result as with humans and faces, and an indicator that chimpanzees are adapted to recognize each other by their rear ends. They also took it a step further and made the images black and white to remove the color clues that chimpanzees could pick up on. Flipping the images upside down seemed to matter less when black and white images were used, which indicates that color plays an important role in picking out individual behinds from the crowd as well. They published their work in the journal PLOS One. Taken together, their results indicate that chimpanzees utilize the same kind of holistic recognition that we do — except for them, it happens on the other end. Their minds seem to put together tiny clues from each rear end they encounter to quickly and efficiently identify potential mates, without them ever having to turn around. Just as a face can be more than a face to us, for chimpanzees, a butt is more than a butt.