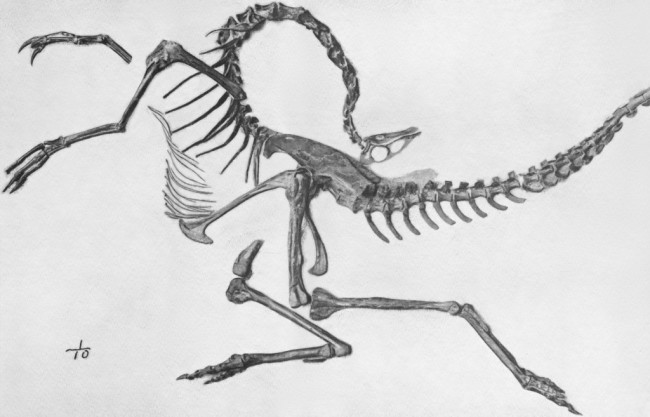 To address a long-standing mystery in paleontology, scientists went to the grocery store. Many dinosaur fossils appear in the same pose, not so much "terrible lizard" as "terrible limbo accident." Their tails are stretched out and their necks thrown back grotesquely. But it's not clear why this is. Researchers from the University of Calgary in Canada got a fresh take on the puzzle—or, at least, a recently killed and frozen take—by using dead chickens. "Chickens are living dinosaurs, as are all birds," says biologist Anthony Russell. Evolutionarily speaking, a chicken is closer to an extinct dinosaur than a crocodile is. So Russell and his student Adam Bentley, an undergraduate at the time, purchased 15 frozen whole chickens from a local grocery store. After thawing out the birds, the researchers put them to work. Chickens naturally hold their necks in an S shape. Russell and Bentley first laid the birds on their sides and arranged them in a lifelike posture, consulting textbooks "and hundreds of images posted on the Internet," they write. Then they gently pushed the chickens' heads back, little by little. At each stage, they took x-rays to see how the neck bones were moving inside the animal. 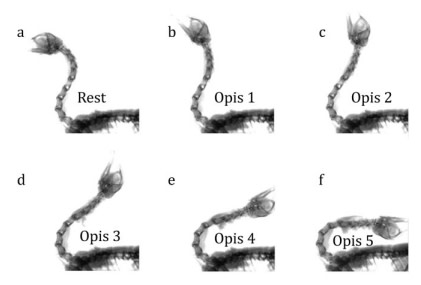 A chicken's neck was flexible enough that it easily moved into the classic death pose. But when the researchers tried to reverse the motion, pushing the bird's head forward onto its breast, its neck sprang back into a less extreme position. From their x-rays, Russell and Bentley measured the angles between vertebrae in each pose. They found that the most flexible vertebrae are in the middle of the neck. The same bendy quality that lets a chicken carcass pose like a fossil, they write, lets a live chicken duck its head all the way to the ground to feed, or reach around to preen its feathers. Russell notes that some scientists have tried to replicate the death pose with living birds, but calls these attempts "rather haphazard." His study shows that a chicken's anatomy lets it assume the death pose easily. But this doesn't tell us why all those fossilized animals did it. Today's mammals and birds can take on a similar spasming posture, called opisthotonus, during certain kinds of illness or poisoning. Some paleontologists have suggested that the same thing happened to prehistoric dinosaurs: their dramatic fossils capture their death throes. Others have attributed the pose to shrinking neck ligaments after death, or (not very convincingly) to water currents twisting the bodies around. "Our study showed that the posture, of itself, cannot reveal anything about cause," Russell says. There may have been multiple ways for dying or dead dinosaurs to end up in the death pose, given how easily their descendants can replicate it. Though his findings were modest, Russell feels that the birds originally "destined for the cooking pot" met a more elevated end. "Those 15 chickens will become part of the human knowledge base," he says, "amply repaying their cost per pound."

Russell, A., & Bentley, A. (2015). Opisthotonic head displacement in the domestic chicken and its bearing on the ‘dead bird’ posture of non-avialan dinosaurs Journal of Zoology DOI: 10.1111/jzo.12287

Planet EarthDid All Dinosaurs Live on Land?
Recommendations From Our Store