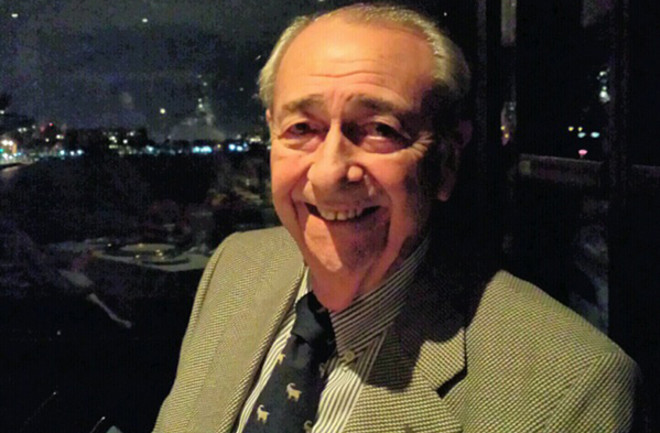 Gil Levin Forty years ago today, the first of two landing probes of NASA’s Project Viking touched down on planet Mars. Discover contributor Dr. David Warmflash spoke with Dr. Gilbert Levin, whose Labeled Release (LR) experiment was one of three instruments delivered by the Viking landers to look for Martian microorganisms in 1976. At age 92, Levin is the only survivor of the three biology experimenters and he’s looking ahead to 2020 when he hopes to have another instrument on the Martian surface looking for life.

A model of a Viking lander on the surface of Mars. (Credit: NASA) Discover: How did the Labeled Release life detection experiment get started?Gilbert Levin: When I was a public health engineer for the state of California in 1951, one of my responsibilities was to determine the sewage-polluted region of Santa Monica Bay and set up quarantine limits for swimmers. To determine the constantly shifting polluted area caused by the discharge of some 300 million gallons a day of Los Angeles’ only partially treated sewage, I took samples of the Bay water back to the lab for bacteriological assay. The problem was the assay took up to three days. The microorganisms had to reproduce themselves enough to make visible bubbles in test tubes from the gases they exhaled. Reporting the results to me took three more days. By the time I had the analyses, they were of historical value. I got the idea of cutting down on the assay time by incorporating radioisotopes into the microbiological test media.

The first photograph of the Martian surface from Viking 1. (Credit: NASA) When I next took a public health engineer job in the District of Columbia in 1952, my boss, Dr. Daniel Seckinger, Director of the Department of Public Health, let me develop my idea at the Georgetown School of Medicine, which I applied for and got a research grant from the Atomic Energy Commission. The experiment worked right away, reducing the elapsed time for the test to about one hour. The minute amount of radioactive gas produced from the carbon-14 nutrient I fed the contaminating bacteria was enough for the microbes to produce detectible amounts of radioactive gas.

That must have been a major breakthrough for water testing, but how did the idea get onto NASA’s Viking mission to Mars?

GL: At a Christmas party, I met Keith Glennan, the first NASA Administrator. Over a martini I asked him whether NASA ever intended to look for life on Mars. He said yes, so I described my carbon-14 test to him. He liked it, and invited me to meet with Dr. Clark Randt. Dr. Randt heard me out and suggested I submit a proposal for a NASA grant. I did. In 1959, received my first NASA grant to develop "The Radioisotopic Biochemical Probe for Extraterrestrial Life." There followed 10 years of science research and then ten more years of instrument development before landing the experiment on Mars. During that period, the name of the experiment changed from "Gulliver", my designation, to "Labeled Release" — NASA's more bureaucratic choice, which it thought better reflected how the experiment worked.

How did NASA go about selecting biology experiments for Viking? How did the LR make the cut?

GL: NASA solicited and sponsored the development of about 20 life-detection experiments from industry, universities, other research institutions and NASA.

The Labeled Release experiment. (Credit: Klein P., Harold, et al.) After a ten-year development period, during which each grantee had to compete annually for support, NASA requested new proposals for development of experiments for the Viking mission (then called "Voyager"). A NASA panel of experts made the final selection of four life-detection instruments. It was a very intensive period of competition, again subject to annual rebidding for another ten years. Late in the development period, one of the experiments, the "Wolf Trap", by Wolf Vishniac, was eliminated by NASA because of cost and weight limitations. It was the one selected for delisting because it was deemed too rich in water, a substance thought to be very scarce on Mars, if there at all. The three surviving instruments were packaged into a space about the size of a shoe box.

Can you tell the readers a little about Wolf Vishniac? Those who have seen the original Cosmos series may recall Carl Sagan’s account of Vishniac’s tragic death after placing several test devices seeking microorganisms in Antarctica as part of the development of Viking, but you must have worked with him very closely.

Wolf Vishniac (Credit: The Worlds of David Darling) GL: Wolf was a charming, very bright and gentle scientist. He was the son of famous European photographer Roman Vishniac, who is well known for his pictures of poor Jewish people before the Holocaust. Wolf served on my NASA committee to develop appropriate experiments for the biosatellite, and he came to visit me from the University of Rochester, where he was a biology professor, at least quarterly. His "Wolf Trap" was the first extraterrestrial life-detection experiment to be funded by NASA (my "Gulliver" was the second). We used to joke about which airport might be snow-free enough for him to return to Rochester from his winter visits to my D.C. lab – Rochester, Syracuse, or Albany! Wolf argued against Norman Horowitz's statement that the dry valley of the Antarctic was sterile. To prove otherwise, Wolf went to Antarctica to test the soil for microorganisms, including by my LR method, which I improvised for him to take along. Unfortunately, as he was retrieving samples for the LR test, he slid off a 1,000-foot cliff and was instantly killed. We eventually got the samples back, they were positive for microorganisms, but their places of origin had been lost in transferring them, so they could not be published as the evidence Wolf sought. Subsequent experimenters have confirmed and published on microorganisms in the dry valley. I still carry guilt over Wolf’s death, because it was my experiment that caused it.

How was your design for the instrument flown on Viking different from the one that you had developed initially at Georgetown for use in testing Earth waters?

GL: I greatly increased the already short response time by injecting just a drop of the radioactive nutrient onto the soil instead of adding a small amount of soil to a test tube of liquid nutrient. Not having to saturate a large liquid volume, the radioactive gas produced evolved immediately and was readily detected by solid state beta detectors, instead of the more difficult radiation detectors originally used. Then, Pat Straat and I increased the experiment’s attractiveness to possible Martian microorganisms by adding additional nutrients. Each one added was a Miller-Urey compound — organic compounds thought to have existed on early Earth. These simple, pre-biological chemicals were thought to have originated on Mars also. However, before selection, each nutrient was tested separately against many types of microorganisms to be sure responses were obtained. Two of the compounds selected occurred as optical isomers (left-handed and right-handed, “mirror image” shapes, that is, they had “chirality”). Earth life almost exclusively prefers left-handed amino acids and right-handed carbohydrates. We had hoped to offer the chiral molecules separately to the Martian soil, but NASA said there were not sufficient weight or space allowances. So we included both chiral forms of the two isomers to be sure we did not miss Martian life that might have a different chiral preference than ours. The separation of the isomers would have been very helpful in distinguishing the response as biological versus chemical, since chemicals react the same to both isotopes of a compound. This might have precluded the 40 years of debate that have surrounded the Viking LR test.

You ultimately detected gas release in the LR at the two landing sites where the Viking probes tested Mars dirt. The control samples did not produce the same reaction as the unheated samples, and you have published many papers making a case that this proved the existence of Martian life.

Still, many researchers have thought the reaction must have been chemical, not biological. You’ve been in constant debate with them for 40 years and the details are too much to include here. However, the dirt reacting with chiral selectivity would change the picture dramatically. Have you tried to send an updated LR to Mars with the left-handed and right-handed test compounds separated?GL: Yes, the details of the many non-biological agents proposed to explain away the LR results are far too much to include here. Suffice it to say, none was accepted by a consensus of space biologists, and each proposed chemical explanation has been rebutted.

The first color image of Mars' surface from Viking. (Credit: NASA) Another thing to bear in mind is that of the thousands of LR tests on Earth soils, pure, mixed and wild cultures of microorganisms, none has ever produced a false positive or false negative. That’s a pretty astounding qualification for any experiment! Pat and I submitted several proposals for a chiral LR to NASA over the years, but were always rejected with the flat statement that no life detection tests would be funded. We are now seeing if we can adapt the HABIT experiment on ExoMars 2020 to incorporate the LR. This would be the first experiment sent back to Mars to seek the nature of the Viking LR positive response in the 40 years since Viking.  However, I do have another iron in the fire. Barry DiGregorio and I, both associated with the University of Buckingham (UK), along with Robert Dorn, Arizona State University, and Robert Lodder, University of Kentucky, in 2015 proposed “A search for extant endolithic and hypolithic microbial communities,” to NASA. The proposal calls for Curiosity to take close-up, high-resolution images of rock surfaces freshly broken when Curiosity rolled over the rocks. The images would be compared with those of terrestrial endolithic microorganisms found living just about a centimeter beneath rock surfaces in frozen climes. Then, Curiosity’s chemical analytical ability would look into the composition of the rock bearing the features — if they are found. Although NASA rejected the proposal, in March 2016 it announced that it was directing Curiosity to carry it out as part of an extended mission. The images are just beginning to be available. We are delighted at this development, even if we don’t get the credit. Are you an advocate for a Mars sample return mission?GL: I advocate a Mars return sample mission, but not to Earth! I am certain the Martian soil contains microorganisms, so why bring them here when we don't know whether they are pathogenic to Earth life?! In a return Mars sample study I did for NASA long ago, I proposed taking the samples to the moon or to an orbiting space station where they could safely be examined.