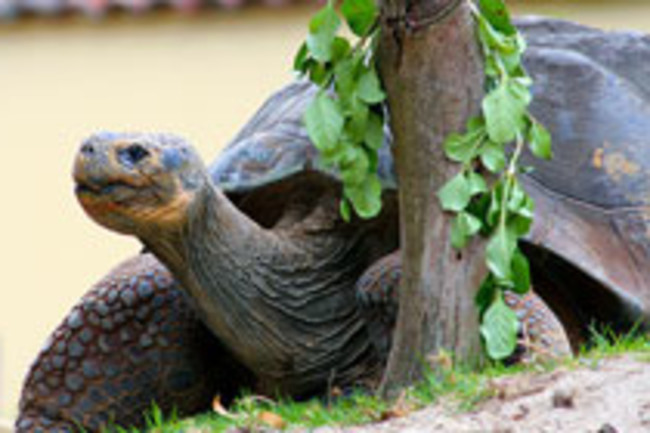 Researchers may be able to recreate a species of giant tortoise that went extinct from the Galapagos Islands with a program of careful breeding. The new possibility hinges on the discovery that a species of giant tortoise living on the biggest island, Isabela, is very similar genetically to the extinct species, Geochelone elephantopus, which vanished from the island Floreana over a hundred years ago.

By mating Isabela tortoises that are most genetically similar to G. elephantopus, selecting the offspring that are most similar and mating those, through successive generations the species’ genetic makeup may be largely restored [The New York Times].

"We might need three or four generations to do this.... But in theory it could be done, and I think it's pretty exciting to bring back from the dead a genome that we thought was gone" [BBC News].

The Galapagos once had 15 species of giant tortoises; when Charles Darwin visited in 1835 he took note of the slight differences between species living on different islands, writing about the variations in his book On the Origin of Species. Four of the species have since gone extinct, as the creatures were often hunted for their meat or their fat, which was burned in oil lamps. But tortoises continued to thrive on the volcanic island Isabela, including one population of mixed-ancestry tortoises that had puzzled researchers wondering which species had crossbred to produce the hybrids.

[T]he connection to the extinct species only clicked after they compared the genetic makeup of living tortoises with DNA taken from museum specimens of the giant tortoise that once lived on the island of Floreana [LiveScience].

The new study, published in the Proceedings of the National Academy of Sciences [subscription required], suggests

that a ship that was hunting tortoises on [Isabela] had dropped a few Floreana natives off when gathering more, allowing the species to establish a genetic foothold on the far end of a different island [Ars Technica].

Ironically, those hunters may have therefore allowed for the eventual resurrection of the species they hunted into extinction. Get a physicist's take on the Galapagos Islands with Lisa Randall's travelogue, "Galapagos Reconsidered."