Can Science and Religion Co-Exist? 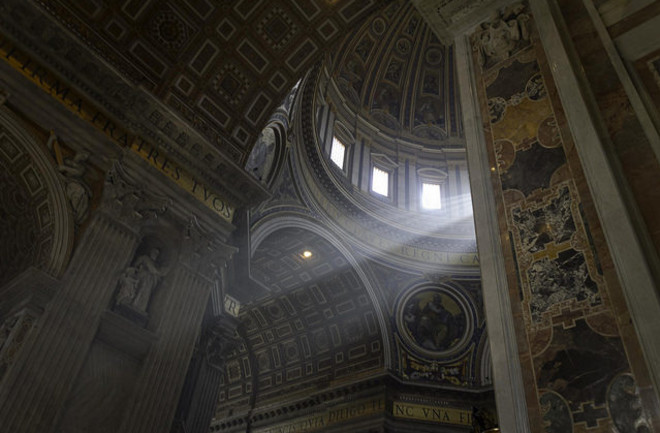 Science and religion have a notoriously fractious relationship, each spouting fundamental “truths” from either side of an ideologically inscribed line. But to Monsignor Marcelo Sanchez Sorondo, the Chancellor of the Pontifical Academy of Sciences, this dichotomy is an unhelpful construct perpetuated by fundamentalists on both sides of the aisle. To him, faith and objectively vetted knowledge are the complementary pursuits of a curious mind. “If you have great faith, you are very interested in more knowledge,” he contends. “If you have great knowledge, you want to know more about faith.”

In a wide-ranging discussion, Sorondo demystified the supposed “culture wars”, stoked a few fires himself, and previewed some of the issues that the Academy will be taking up in future sessions.

With a refreshingly open understanding of the scientific enterprise, Sorondo argues against a literalist interpretation of Christianity’s foundational text. “Is the Bible a scientific book? No,” he says. “They used the knowledge of science they had at the time, but today we can use other forms.” Despite this willingness to incorporate new data, there is one non-negotiable plank of the platform: “The important thing is that things are created by God."

Sorondo recently met with actor Morgan Freeman, who has spent much of the last year on a spiritual quest; the inter-demoninational findings of the walkabout are profiled in the six-part Story of God miniseries, which kicks off Sunday, April 3rd on the National Geographic Channel. As the two discuss the scientific and religious viewpoints on the origin of the universe, Sorondo finds no contradiction. “What happened before the Big Bang?” he asks rhetorically. “Creation has nothing to do with the Big Bang.”

Pope Francis - who occasionally charges the Academy with topics to study, but mostly keeps his distance - has been a strong supporter of efforts to limit the effects of human-induced climate change, which will disproportionately harm the world’s poor. And while the current pontiff has expressed this viewpoint with new passion, the idea itself is nothing new for the Vatican. “The idea that the human activity to use fossil [fuels] is the first cause of climate change and of global warming is an idea that the members of our Academy have said for 25 years or more,” says Sorondo.

Last year, the pope met with UN leaders and called on the international organization - which Sorondo characterizes as modern civilization’s most important institution - to strike all carbon-emitting fuels from the global energy portfolio. Regarding the criticism these meetings drew: “it’s only in the minds of some Tea Party people that don’t understand anything."

Climate change - and particularly the social justice repercussions - remains a focus for the Academy, but it’s a crowded docket. Other items on the agenda include inquiries into sustainable development, energy, stem cells and genetics, and perhaps most intriguingly, artificial intelligence. Can robots have a conscience, and to what extent will their proliferation change what it means to be human? Sorondo’s initial take: “The human person is not only the intellect, but they are all of the components, like the will and the soul, and the soul is not changing if you have more instruments in your mind."

Sorondo exudes a sense of scientific fatalism, if not unbridled optimism. He maintains that scientific knowledge and faith-based understanding are two sides of the same coin, and, indeed, that “modern science was born in the context of the Christian faith.” He recognizes that technology is advancing rapidly, and that many of the concomitant changes are demanding answers to longstanding philosophical and religious questions. By bridging the supposed divide between science and the church, Sorondo is hopeful that both perspectives can move forward in the mutual interest of better understanding the world around us.