Can Holistic Conservation Save the Sumatran Rhino?

In Indonesia, one conservation effort values both animals and humans. 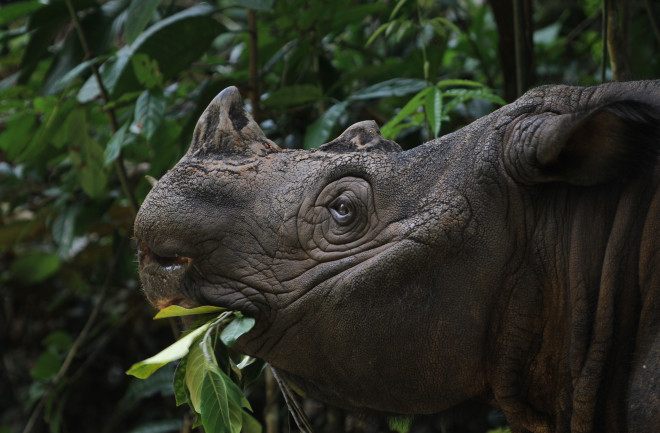 During the last ice age, from around 2.6 million to 12,000 years ago, Sumatran Rhinoceroses roamed the far reaches of east Asia. To the north, the squat, hairy, two-horned ungulates could be found as far as the Yellow River Valley in present-day China. To the south, their range extended into the tropics of present-day Indonesia. When global temperatures warmed at the dawn of the Holocene era, sea levels rose and separated Borneo, Java and Sumatra from mainland Asia, creating multiple distinct populations of the species. For millennia, Sumatran rhinos thrived on either side of the South China Sea.

But, as civilizations advanced and the human population surged in ancient East Asia, Sumatran rhinos numbered fewer and fewer. Forests shrank to make way for agriculture and development, and the animals were hunted for hides and horns. In the modern era, habitat destruction and pervasive poaching pushed the mainland population over the brink. The last known mainland Sumatran Rhino, Iman, died in Malaysia in 2019.

Today, less than 80 Sumatran rhinoceroses are left in Indonesia — and that number is decreasing. The population is scattered between a few protected areas in Sumatra and a province in Borneo. And their future is uncertain. Even if the remaining population is protected, limited genetic variability and the low breeding rate of Sumatran rhinos remain challenges to their survival.

After their first few years of life, Sumatran rhinos tend to live a solitary life. By day, they bathe in mud wallows to combat the high heat and humidity of their chosen habitat. At night, they cover many miles in a search of sustenance, water and salt licks. According to Inov Sectionov, the Indonesian program manager at the International Rhino Foundation (IRF), Sumatran rhinos eat twigs and leaves from at least 200 species of trees, shrubs and understory plants. As they graze, the rhinos give as much back to the forest as they take away. “One rhino can cover 15 kilometers in a night. Along the way, seeds cover their body and spread everywhere,” he says.

While the Sumatran rhinos are the smallest of today's living rhinoceroses, they're still more closely related to the extinct woolly rhinos than any other species. (Credit: Light And Dark Studio/Shutterstock)

In addition to dispersing seeds, the rhinos also fertilize them. In one experiment, Sectionov put Sumatran rhino droppings into a neutral media and waited to see what would grow out of it. “From one poop, we saw 12 to 15 species of food plants grow,” he says. “You can imagine in the wild, when they drop the poop everywhere, it can grow a new forest.”

Like most “megaherbivores,” Sumatran rhinos are an integral part of the ecosystem they dwell in. Conservation efforts that aim to strengthen rhino herds must also protect an ecosystem that is home to the Sumatran tiger, Sumatran elephant and countless species of plants and fungi.

From Destruction to Reforestation

Today, habitat destruction is the biggest threat to the dwindling population of Sumatran rhinos in Indonesia. For decades, the palm oil industry has decimated the tropical forests that the animals rely on. But, sometimes, encroachment is as simple as a local farmer clearing a farm field to grow food for their family. This is a pervasive issue in Way Kambas National Park, a 485-square mile tract of forest and swamp in southern Sumatra.

“Way Kambas National Park is the only protected area in Indonesia that has no buffer zone. Villages abut the park boundary and, in the past, human settlements have often encroached into the park,” says Nina Fascione, executive director of the IRF. “But it also holds one of only, maybe, two Sumatran rhino populations that are big enough to reproduce.”

In 2019, the Indonesian National Park system partnered with the IRF and Yayasan Badek Indonesia, a local NGO, to combat the problem with a novel approach. They enlisted workers from surrounding communities to embark on a reforestation project that would restore degraded lands within the park boundary to native forests. In a site dubbed Rawa Bunder, an overgrown former cassava plantation, workers planted more than 15,000 seedlings during the first season of the project. “We tried to include as many people in the planting process as we could,” Sectionov said.

In addition to employing local help, Sectionov hoped that the project would continue to provide value to community members after the forest was established. A healthy forest could bolster local tourism, and some of the same trees that rhino’s rely on are useful to humans too. Jackfruit is one such example. By making the forest’s neighbors stakeholders in its restoration, its founders believe the project could achieve lasting change.

One Step Back, Two Steps Forward

Still, the seedlings didn't have long to settle into the soil at Rawa Bunder before they were disturbed once again. In November of 2019, the site was consumed by flames. Sectionov suspects that a group of poachers set the fire, hoping to detract attention from operations elsewhere in the park. “The entire project was burned, gone,” Sectionov says.

But, instead of giving up hope, the National Park-led team doubled down. In addition to restoring the burned site, the team began work on a second site, Rawa Kidang, just outside Indonesia's capital of Jakarta. Sectionov recruited a large team of local workers that included farmers, people with disabilities and even former poachers. Together they planted 21,000 seedlings. Many local families also signed pledges agreeing to not farm or hunt in the park.

Working with ex-poachers was more than a peace offering. Through these new alliances, the team was able to locate hundreds of snares, which pose a danger to rhinos long after they are abandoned. “Last year we collected more than 300 snares. This year, less than 50. The hazard is decreasing,” says Sectionov.

Already, many saplings are taller than people, and wildlife have begun to return to the area. This year, the reforestation team found prints from a tapir, a hog-like mammal that was once extirpated from the area.  “I’m so proud working with these people. The project has gone way beyond my expectations,” Sectionov said.

With any luck, one day the team will find rhino prints at Rawa Kidang, too.

Anthropocentrism, meaning an ethical system in which humans have the highest value, is often used pejoratively by environmental advocates. If we can’t see value in an ecosystem as a whole, we will inevitably degrade it, some say. But, others have argued that a healthy amount of anthropocentrism can aid and motivate environmental protection. In the case of Rawa Kidang, conservation was only possible once the needs of the surrounding community were met. Through including the people that had the most to gain, and also the most to lose, from a conservation perspective, Sectionov’s team was successful.

This perspective is important to the IRF’s work throughout the global ranges of rhinoceros species, though it may be more effective in Indonesia than in places with higher rates of poaching. “It is not the local people that are driving the global poaching crisis when we’re talking about rhinos," says Fascione. "These are international criminal syndicates."

Even so, poaching operations usually rely on local help for access to an area, knowledge of the local terrain and, oftentimes, footsoldiers. Whether the issue is poaching or habitat encroachment, local communities will always be a part of the equation. “Working with local people is essential,” Fascione says. “If you can create employment opportunities and sustainable industries based on your conservation of the species, that reduces the motivation to assist these criminal syndicates.”