Can Bacteria Create a Cement Wall to Hold Back the Sahara? 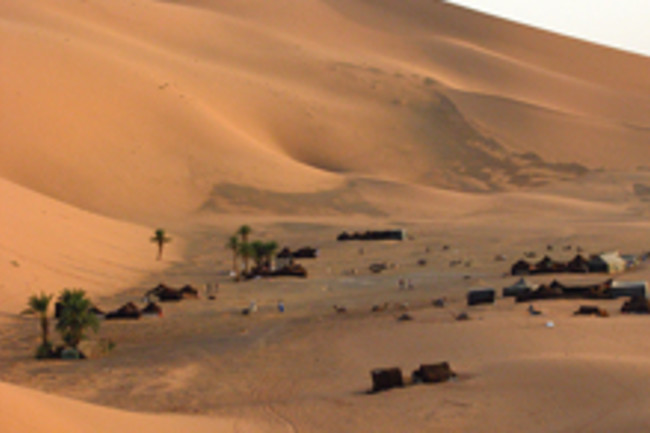 To stop the spread of the Sahara Desert, one innovative thinker has proposed a bold plan: a wall along the southern border of the desert that would hold back the advancing dunes. Swedish architect Magnus Larsson says the

wall would effectively be made by "freezing" the shifting sand dunes, turning them into sandstone. "The idea is to stop the desert using the desert itself," he said. The sand grains would be bound together using a bacterium called Bacillus pasteurii commonly found in wetlands." It is a microorganism which chemically produces calcite - a kind of natural cement" [BBC News].

already well-known in the field thanks to his proposed Great Green Wall, a 4,349 mile line of trees stretching across Africa to stop desertification [Fast Company].

The sandstone wall could compliment the green wall, Larsson says, because if people chopped down the trees for firewood the sandstone wall would still remain. The architect unveiled his proposal at the TEDGlobal conference in Oxford, dedicated to "ideas worth spreading." Larsson explained that the

bacterium would get into the dunes either by injecting it (on a massive scale) or by giant balloons filled with it -- these would be place in the way of the moving dunes, which would wash over the balloons, which in turn would be popped allowing the bacteria to get into the sand [Treehugger].

"However, it's a beginning, it's a vision; if nothing else I would like this scheme to initiate a discussion," he added [BBC News].

Related Content: 80beats: Architects Propose Fantastic Greenhouses Across the Sahara 80beats: A Solar Power Plant in the Sahara Could Power All of Europe DISCOVER: How to Make a Desert