Can a sniff of oxytocin improve the social skills of autistic people? 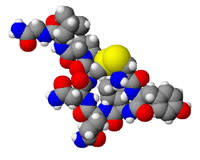 The social interactions that come naturally to most people are difficult for people with autism and Asperger syndrome. Simple matters like making eye contact, reading expressions and working out what someone else is thinking can be big challenges, even for "high-functioning" and intelligent individuals. Now, a preliminary study of 13 people suggests that some of these social difficulties could be temporarily relieved by inhaling a hormone called oxytocin.

The participants, who either had Asperger or high-functioning autism, experienced stronger feelings of trust, showed stronger social interactions in a simulated game, and paid more attention to socially important cues like someone else's eyes. These results will need to be confirmed in larger studies in real-world situations, but for the moment, they're promising.

Oxytocin is involved a myriad of emotions and social behaviours including trust, social interactions, sexual arousal, the bond between mother and child (see SciCurious'sepicoxytocinseriesformore). It has been linked to autism before. Autistic children have lower levels of the hormone coursing through their blood and what little there is appears to be made in an abnormal way. Some researchers are testing oxytocin as a treatment for some symptoms of autism, including repetitive behaviours, but the new results are some of the most interesting yet.

Elissar Andari gave oxytocin in the form of a nose spray to 13 autistic people and 13 typical ones of similar ages and genders. Each volunteer came into the lab twice and was given either oxytocin or a saline spray and neither they nor the scientists knew which was which until the experiment was over.

The recruits played an online game where they passed a ball to three other 'players', who were actually controlled by the computer. The aim of the game was the catch the virtual ball as many times as possible, so it's worth identifying and playing with cooperative characters. Most people do this easily, returning the ball most often to players who pass it to them. Autistic people, however, will pass the ball equally to all the players, regardless of their behaviour.

But a whiff of oxytocin changed all of that. The autistic players became more likely to engage with "good" players who passed the ball to them and shun "bad" players who ignored them (see left side of image below). And they became more and more entrenched in these preferences as the games progressed and the behaviour of the good and bad players became more evident (see right side of image below). They didn't quite match the behaviour of the neurotypical volunteers, but they weren't significantly different either.

After the game was over, a questionnaire confirmed that the autistics strongly preferred the good player and trusted them more if they played under the influence of oxytocin. This suggests that oxytocin helped the autistic players to intuit and interpret social cues that they would normally gloss over. 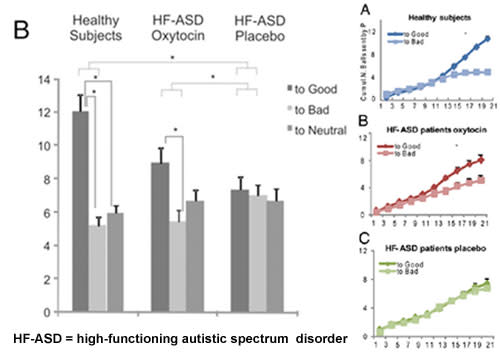 In another test, Andari tracked the eye movements of her volunteers as they looked at pictures of faces on a computer. As you'd expect, typical people look at the faces themselves but autistics clearly find this uncomfortable. They spend half of their time looking elsewhere and when they do look at the faces, they their dart their eyes around with anxious haste and specifically avoid staring at the eyes. Again, a whiff of oxytocin narrowed the gap between typical and autistic behaviour. The autistics spent more time looking at the face and the eyes in particular, and they explored the images with more deliberate and relaxed eye movements.

A lack of eye contact is one of autism's core problems and oxytocin's ability to overturn it is certainly promising. But looking at eyes in a laboratory test doesn't necessarily translate into real-world behaviour. Between this and a very small sample, it's unsurprising that other scientists are wary of the results. Everyone I spoke said that the study needed to be repeated with more people in realistic settings.

However, many people are optimistic. Larry Young from Emory Universitydescribed Andari's work as as "promising" and "one of the better papers" in this area. However, he adds, "I would caution the public in their interpretation that this is definitely not a cure. They did these tests in a very controlled laboratory setting and they need more sophisticated studies of real social situations. Does oxytocin help people to read body language? Will they really look at the eyes more?"

Uta Frith from University College London agrees. "Against my initial scepticism... I found the paper very persuasive," she says. But she echoes Young's concerns and she wants to know exactly how the oxytocin effect works so that proper treatments could be designed. "Nevertheless," she says, "this form of pharmacological intervention would be a first in the treatment of the key social impairments of autistic disorder. This could be revolutionary."

Frith also wants to see if oxytocin could work on all autistics or just high-functioning ones. Even in Andari's study, some of the recruits responded strongly to oxytocin but others were totally unaffected. Other scientists have tried to categorise autistic people based on their style of social interactions, and it may be that oxytocin only 'works' for some of these groups.

For example, Andari noted that most of those who showed improvements in the ball-throwing game would be classified as "active-but-odd" - they normally approach other people but do so awkwardly. In contrast, most of the people who didn't show improvements fell into the "aloof" category - they avoid any close contact and actively reject social advances.

George Anderson from the Yale Child Study Centre is more skeptical about the future potential of oxytocin. He notes that the hormone doesn't easily reach the brain it doesn't last for long in the blood. It has a half-life of just a few minutes. Even if future studies replicate Andari's results, it's not clear if oxytocin could ever be used in practice.

Young agrees and says, "I don't think that this particular treatment will become widely used." He sees these experiments as a starting point for developing drugs that mimic the effect of natural oxytocin but with longer half-lives. "We could try to target the oxytocin pathway with other drugs that do penetrate the brain and that have longer half-lives. But I personally think that this kind of treatment may be more beneficial when it's combined with behavioural therapy sessions, with their defined settings."

For now, many people, especially parents of autistic children, may be tempted to try out oxytocin. But Frith warns, "In previous cases, such as treatment with chelation, hormones or large doses of vitamins, initially positive results which led to immediate applications, had either no effects or rather harmful ones." Young agrees, saying that the risks are still unknown. "I would definitely not recommend that people try to do this on their own," he adds. "It shouldn't be done without the assistance of a physician and I don't think physicians should be doing this until we have more data."

Anderson, despite his skepticism, takes a more pragmatic stance. "It's not recommended but it may be hard for some parents not to try," he acknowledges. "If anyone does go ahead at this point, they could try to blind their efforts by using saline in a similar bottle. One parent could administer the oxytocin or saline and the other parent [who doesn't know which was used] could rate the [child's] behaviour over the next hour. For a number of reasons, this wouldn't constitute a true double-blind study, but it might reduce false-positive responses."