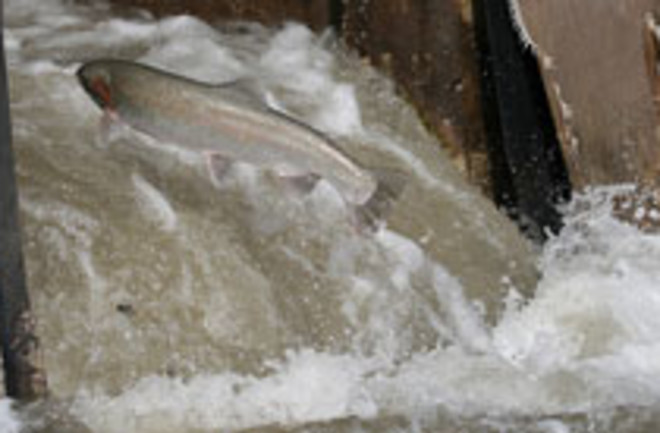 A federal judge declared that California's water management system is jeopardizing the existence of the state's salmon and steelhead, which have to navigate the complicated network on their journeys out to the ocean and back to their riverine spawning grounds.

The judge's ruling established that the canals and pumps that deliver water to 23 million Californians are causing "irreparable harm" to two salmon species, as well as the threatened Central Valley steelhead [AP].

like storing more water behind Shasta Dam, which could be released later to help migrating fish. But

the judge's conclusions mean regulators will be forced to impose more protective conditions when they issue a new permit in March, lawyers said. "It's a clear signal that business as usual in the Delta is not going to be acceptable," said Kate Poole, a lawyer for the Natural Resources Defense Council [Contra Costa Times].

Sacramento-San Joaquin River Delta are in an uncomfortable spot. Environmentalists and commerical fishermen are clamoring for more protection for the fish, since the

number of salmon in the ocean plummeted this year, prompting a ban of fishing all along the California and Oregon coasts [San Francisco Chronicle].

But California's farmers, who are already suffering from a worsening drought, object to any measures that would cut down on irrigation to the farms that line the Sacramento River.

The judge's ruling Friday forcefully sided with environmentalists on the peril facing the fish, even spelling out a worst-case scenario in which the entire population of winter-run salmon in 2009 could be wiped out if officials fail to hold back enough cold water in Shasta Dam [Los Angeles Times].

The water agencies won't issue a new plan to protect the fish until March.