California Is All Dried Up 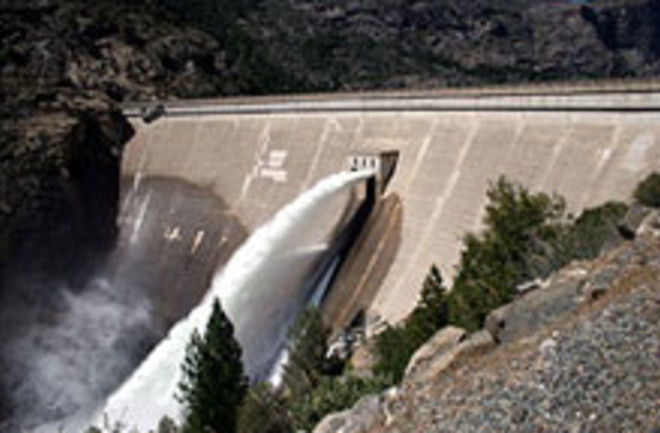 It's official: California is in a state-wide drought, according to Governor Arnold Schwarzenegger. Following the driest spring in 88 years, the state's reservoirs are low, its farmers are complaining, and its forests are tinder-dry, which may lead to more forest fires like the one that scorched the Santa Cruz mountains two weeks ago. In giving the current dry spell the official "drought" stamp for the first time since 1991, the governor cleared the way for water transfers to stricken areas and a possible infusion of federal aid to speed water conservation projects. But Schwarzenegger stopped short of declaring a water emergency, which would permit water rationing. Some researchers have wondered whether the state is already suffering the early effects of global warming, which is predicted to alter California ecosystems by raising temperatures, and thus allowing less snow to build up in the mountains of Northern California.

The snowpack in the Sierra Nevada, which accounts for a large share of the state's water supply, was at 97% of normal in March. By May it was down to 67% of normal. Warm weather throughout the spring caused the snow to melt quickly, [Water Resources Director Lester] Snow said, with much of the water evaporating instead of running downstream into reservoirs. "The snowpack has been disappearing, and it has not manifest itself as runoff," Snow said [Los Angeles Times].

State officials are most concerned about the drought's effects on agriculture, which is vital to the state's economy. Farmers in some of the most fertile stretches of the Central Valley have found little relief thus far. The Westlands Water District supplies growers of $1.3 billion in cotton, tomatoes, garlic and onions in western Fresno and Kings counties. This week, the U.S. Bureau of Reclamation cut the district's water allotment to 40 percent of normal, forcing about one-third of the district's farmers to decide which crops to irrigate or write off for this year's harvest.

"This is the first time in the history of Westlands Water District that our growers have had to do this," said spokeswoman Sarah Woolf, adding that the district was formed in 1964. "It's just unbelievable" [San Francisco Chronicle].

Many different plans have been floated to cut back on the state's water use over the coming decades. The governor is pushing an $11.9 billion bond to build dams and update infrastructure, while other officials are calling for conservation in homes or scientific solutions.

A bill to require Californians to cut water use 20 percent recently passed the Assembly. The bill, which requires Senate approval, puts most of the onus on residents, and little on the agriculture industry, underscoring tension over conservation between city dwellers and farmers, who consume most of the state’s water. Across the state, many districts and municipalities are instituting or considering recycling, rationing and higher fees for excessive use. For instance, Los Angeles officials recently announced their intentions to begin using heavily cleansed sewage to increase drinking water supplies [The New York Times].

Of course, DISCOVER readers already know that taking shorter showers or refraining from watering a lawn yield small savings in comparison to the "virtual water" you save every time you choose tofu instead of beef, or eat an apple instead of a banana.