Scientists are beginning to understand that we aren’t the only animals who laugh — but human and non-human laughter do have some key differences. 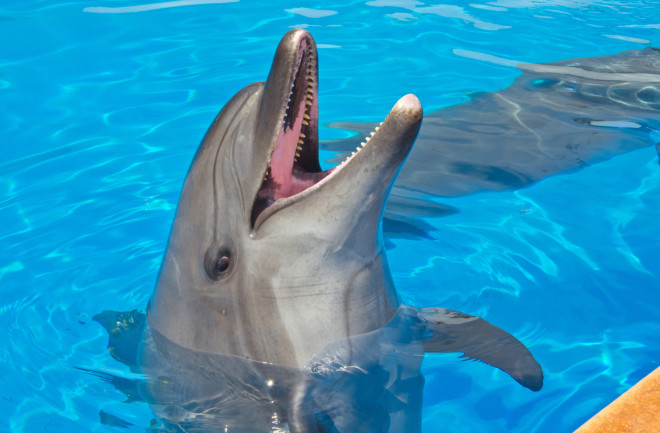 Scientists have long known that non-human animals play, but a literature review published in the journal Bioacoustics this April found that laughter (called “play vocalization”) accompanies playtime in at least 65 species. Most of these chortling critters are mammals, but a few birds have been caught laughing too.

There could be even more laughing animals, says UCLA vice chair and professor of communication Greg Bryant, a co-author of the paper. Unlike us, most non-human animals laugh quietly — presumably to avoid attracting the attention of predators. This makes it tricky to study their laughter in the wild. Still, the data analyzed by Bryant and co-author Sasha Winkler, a doctoral candidate in biological anthropology, illuminate existing research and examine the range of play vocalizations across a variety of species.

The study sheds light on the evolution of human language as well. “Many mammals, most importantly the great apes and monkeys most closely related to us, have play signals that are similar to voiced breathing or panting,” Winkler said in a recent interview with animal behavior expert Marc Bekoff. “Because this is such a common feature, it lends support to the theory that laughter in humans evolved from a panting-like play signal.”

Bekoff, a professor emeritus of ecology and evolutionary biology at the University of Colorado, Boulder, has done influential work on communication and social play in non-human animals himself. This paper, he says, is “landmark” research that sets the stage for further work on social behavior in non-human animals.

Volume isn’t the only thing about human laughter that makes it different from that of other animals. When non-human animals laugh, it’s often more than a spontaneous expression of joy. Rather, it’s likely a way of signaling “benign intent,” write Winkler and Bryant. In other words, a laugh can prevent play from turning aggressive by communicating, “Relax. We’re just playing here. No need to get defensive.”

Although these signals can sometimes get lost in translation (transforming what started as play into something more serious), laughter is fairly straightforward in non-human animals. That’s not always the case with humans, however, who laugh for a variety of reasons. Like other animals, we use laughter to signal cooperative intent. It can also strengthen our emotional bonds with one another. But human laughter has a dark side; we laugh to taunt one another, sometimes cruelly, and often laugh to conceal our emotions. Sometimes, we even use laughter to deceive.

That deception might not always be successful, though. While laughter is indeed a form of communication, it’s not the same thing as language. In fact, it’s a different vocal system entirely.

“One is an emotional vocal system that has its own dedicated and rather simple brain circuitry. All mammalian vocalizations are pretty much derived from the same exact system,” says Bryant, who studies the evolution of social communication and the use of laughter as a communication tool. “But humans have a speech-production system that is neurologically and functionally distinct. And that's how we're able to produce speech sounds.”

Laughter comes from the first system; speech from the second. They’re totally different systems of communication, and that’s probably why it’s so hard to fake laughter. When we try to laugh on purpose, we tend to use our speech system — that’s a dead giveaway. Bryant’s research has shown that listeners can spot fake laughter, even when that laughter comes from people in a vastly different culture, by listening to just a brief sound clip.

Non-human animals, on the other hand, can’t laugh on purpose. When they start giggling, they mean it.