The relationship between bees and plants is one of the most well-known in the natural world. Almost everyone knows that bees carry pollen from plant to plant and receive a rewarding sip of sugary nectar in return. Surely there are few sides to this most familiar of alliances left to discover? 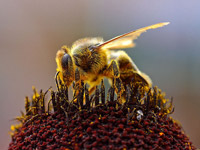 Not so. Jurgen Tautz and Michael Rostas from the University of Wuerzburg have found that bees provide another service to flowers, besides acting as a pollen vehicle - they deliver a protection service for their very buzzing scares away hungry caterpillars.

In their University's botanical garden, they set up two cubic tents and placed either ten bell peppers or ten soybean plants inside them. On each plant, they added ten caterpillars of the beet armyworm - a voracious plant predator with catholic tastes in food. The only difference between the two tents was that one was connected to a beehive. Two feeders sat in the far corners of the tent, so that the workers regularly flew past the plants and the caterpillars on them.

After 18 days, Tautz and Rostas found that the plants which had been exposed to buzzing bees were far less damaged than the unprotected ones. For both soybeans and peppers, the caterpillars had damaged significant more leaves and gobbled over three times as much if there were no bees around. The only plants that weren't protected by the bees were bell peppers that had already produced fruit - in those cases, the disturbed armyworms simply burrowed into the developing fruit, where they were safe from any potential threats.

Tautz and Rostas think that it's a fear of wasps that halts the caterpillars endless nibbling. Wasps prey on caterpillars, and their threat has prompted many species to evolve sensory hairs that detect the vibrations given off by buzzing wings. Caterpillars eat almost continuously, but if their hairs detect danger, they either freeze or drop off. Either way, the plant's precious leaves have a brief reprieve from munching mandibles.

But the caterpillars' defence is not a fine-tuned one. They can't tell the difference between the buzzing of deadly wasps and harmless bees, and if vibrations from either are detected, the reaction is the same - stop and drop. So bees, even though they pose no real danger to caterpillars, manage to provide plants with an unwitting protection racket.

In the long history of honeybee research, it's surprising that this is one of the few studies to measure the indirect benefits that these insects provide for the plants they pollinate. Tautz and Rostas now want to see if their results could be used to inspire a new method of biological control. Perhaps the impact of caterpillar pests could be limited by fields of flowers grown near crops to encourage the arrival of bees. Maybe even recordings of the sound of bees could work.