Buy a Fish, Save a Tree

A counterintuitive fishery in Brazil's Amazon yields 40 million tropical fish a year while protecting the rainforest. 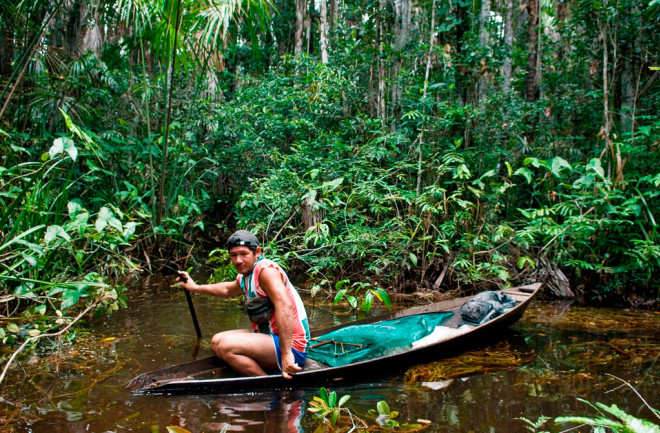 A fisherman on the Rio Negro hunts for the cardinal tetra, popular with collectors around the world. | Johannes Arlt/LAIF/REDUX

At sunrise on a September day in 1991, as Scott Dowd’s riverboat floated up the Rio Negro in Brazil, flocks of shrieking macaws streaked the sky red and gold. Otherwise, “my full field of vision was filled with jungle,” he remembers.

Best of all for the self-described “fish nerd” from Weymouth, Massachusetts, the dark waters beneath his boat teemed with beautiful fish—species he’d kept in aquarium tanks since he was 10. Now he was headed to the place they’d come from: Barcelos, a town of 20,000 in the heart of the Amazon.

But when he got there, he was horrified.

The riverfront was jammed with men in dugout canoes. They had come from the surrounding municipality, a rainforested area the size of Pennsylvania, bringing hand-woven baskets lined with plastic, now brimming with tiny, colorful fish. Tubs of the fish they caught would fill the entire bottom floor of an 80-foot ferryboat headed to Manaus, 280 miles to the south.

The fish were bound for exporters supplying home aquaria around the world. The estimated catch of tropical fish leaving the area, Dowd discovered, was more than 40 million fish per year. “My kneejerk reaction to this was, this was out of control!” he says.

But now, 22 years later, he eagerly admits: “I could not have been more wrong.” Today he is a senior aquarist with the New England Aquarium in Boston. When he’s not training electric eels or organizing anacondas, Dowd is working to promote a project he helped found shortly after that Amazon expedition.

It’s based on a counterintuitive premise: that fishermen can protect rainforest, nourish the local economy, and promote animal welfare by taking large volumes of wild fish out of their natural habitats to ship them thousands of miles away.

“There are extremists who want to see the entire aquarium industry shut down,” Dowd says, “but in this case, it’s protecting not only the fish, but the whole ecosystem.”

Named Project Piaba (Piaba means “little fish” in Brazilian Portuguese), the project’s slogan is “Buy a Fish, Save a Tree.”

“It’s a really intriguing, groundbreaking project,” says Paul Boyle, senior vice president of the Association of Zoos and Aquariums. The idea at first sounds outlandish. Freshwater fish may be the most threatened group of species on the planet, facing obstacles from dams to pollution, according to Gordon McGregor Reid, chair of the Freshwater Fish Specialist Group at the International Union for the Conservation of Nature.

But along the Rio Negro, fishermen capture shy, small fish quietly and gently, by hand. Families who live in thatched-roof houses built on stilts above the rising and falling river scoop the fish from the water with handheld nets, then transfer them with hollowed-out gourds to baskets. Unwanted fish are released instantly where they are caught. “I know of no more benign fishery,” Dowd says.

How can the area sustain an annual take of 40 million fish? Every year, when the dry season comes and the water level drops, billions of ornamental fish lie doomed in drying puddles. Many species compensate by producing extravagant numbers of offspring, with each female laying hundreds, if not thousands, of eggs.

Normally these fish are so plentiful that many dozens can be captured in a single sweep of a net; but when they are not, fishing families move to a different area, allowing local populations to recover. And lucky are the fish scooped into their nets. In the wild, it’s rare for, say, a cardinal tetra to survive a full year. In captivity, that fish might live two or three.

With Project Piaba Co-founder Ning Labbish Chao of Universidade Federal do Amazonas (since retired from the project), Dowd saw an opportunity and sought to nurture it. The small fish of the Rio Negro are “exactly what hobbyists love,” he says.

Sculpted by the dark, acidic river’s challenging conditions—including an annual drop in water level of more than 30 feet—the fish have evolved strange forms, bizarre habits, and striking colors. The marble hatchet fish can fly to escape predators. Splash tetras leap from the water and spawn on the undersides of leaves to protect their offspring. The cardinal tetra glows in neon stripes of electric red and iridescent blue to help them school in dark waters.

The cardinal tetra is just one of many species uniquely adapted for life in Brazil’s Rio Negro. | Tianne Strombeck

For fish hobbyists, owning one of these creatures is “like bringing an object of living art into your home,” says Sandy Moore, vice president of Segrest Farms, the world’s largest wholesaler of aquarium fish. The cardinal tetra, found only in the Rio Negro and Orinoco, is the most popular aquarium fish in Europe.

(Together, the countries of the E.U. constitute the world’s largest market in the $278 million global ornamental fish industry.) It ranks among the top 50 of more than 2,000 species on offer in the largest single market in the world, the U.S.

Riding the tide of a strong market, piaba have proved crucial to the region’s economy. Barcelos’s aquarium trade now provides 60 percent of the cash income for 40,000 people who live in this 46,000-square-mile municipality. Piabawas once considered almost a derogatory term, like pipsqueak.

But today, to be a piabeiro (someone who fishes for piaba) is a big deal. For the past 14 years, Barcelos has held an ornamental fish festival each January, celebrating the profession and the fish. It’s similar to the more famous Brazilian Carnival.

Amid floats and fireworks, elaborately costumed performers represent opposing teams of colorful cardinal and round, flattened discus fish. The town has even built a stadium, the Piabodrome, for the festival.

Which is why the piabeiros and their families are unlikely to welcome environmentally disastrous timber, cattle ranching, and mining interests that would pollute their river with silt, dung, or toxic metals. Because the aquarium trade provides such good profits, explains Reid, “you give indigenous people a reason to conserve aquatic habitats.”

It’s a model that could work around the world, according to Boyle. The Western Ghats of India is also a prime area for freshwater aquarium fish, and it’s one of the world’s most heavily populated biodiversity hotspots—supporting elephants, tigers, hornbills, and 30 million people.

In Bali, communities are working to restore destroyed coral reefs in an effort to revive the aquarium fish industry. More than a dozen countries are interested in using similar models for their fisheries and conservation planning. “The people will want the water to remain pure, because they’re deriving their livelihood from that water,” says Reid. “We think that’s great.”

So does Saanna Cram, who was born in Barcelos and whose uncle is a piabeiro. Before she moved to the Boston area, she used to dance in the festival. But today, she says, the piabeiros face new threats. “Unfortunately, not everyone understands the importance of these fish to Barcelos,” she says.

She’s deeply worried that some pet stores are relying on captive breeders in the U.S. and Asia, who sometimes use hormones to force their fish to spawn. Nearly 90 percent of freshwater aquarium fish worldwide are from fish farms, and not the wild. “Piabeiros are losing their jobs,” she said. Eliminate the piaba payoff, and the local economy, piabeiro culture, and reasons to resist logging and mining will disappear.

So, Project Piaba has enlisted the help of the Association of Zoos and Aquariums. Last spring, the organization began planning to showcase Barcelos’s ornamental fish to its 180 million visitors, connecting home fish keeping, conservation, and poverty alleviation. “This is a model program in its importance,” says Boyle. “People taking care of the environment is what it’s all about.”

Moore, from wholesaler Segrest, is on board—literally. At the end of January, she accompanied Dowd on his annual voyage to Barcelos, to see what a difference buying a wild-caught fish can make. She’s planning to work with retailers to offer “eco-labeling” of fish, to let home hobbyists know how buying a fish can save a tree.

Meanwhile, Dowd dreams of pet stores providing a QR code that can be scanned by the hobbyist, who can then link to a website where he can meet the people who caught his new pet—and see how his purchase is helping to protect the Amazon. “If it tells the story of helping families protect their environment,” says Moore, “then that’s a good thing.”