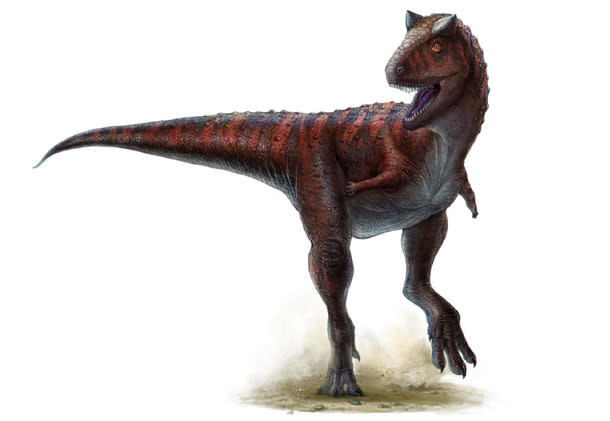 If you look at the skeleton of the flesh-eating dinosaur called Carnotaurus, two features instantly stand out: the skull and the arms. The fearsome skull is short, deep and topped by two devilish horns. Hence, its name: “meat-eating bull”. The arms are much less fearsome – they’re so short that they make Tyrannosaurus’s stunted fore-limbs looks like those of a wrestler. These body parts are distinctive, but Scott Persons and Phillip Currie from the University of Alberta think that the most interesting parts of Carnotaurus are its hips and tail. By reconstructing the meat-eating bull’s hindquarters, Persons and Currie have found evidence that this dinosaur was much faster than anyone had thought. Powered by an enormous tail muscle, Carnotaurus was the Usain Bolt of the Cretaceous, well-adapted for short-burst sprinting. Carnotaurus is the most famous member of the abelisaurids, a group of large predatory dinosaurs that hunted in the southern hemisphere, while the tyrannosaurs dominated the north. WhenArgentinean palaeontologist Jose Bonaparte discovered the animalin 1990, he suggested that it would have been a good runner. Others called this view into question when they discovered other closely related abelisaurids whose hind limbs hinted at a slower pace. But leg bones don’t tell the whole story about a dinosaur’s running speed. You also have to look at its tail. The flesh-eating theropods, like Carnotaurus and Tyrannosaurus, had a pair of large muscles that ran along the sides of their tails. These muscles, known as the caudofemoralis, attached to the animals’ thigh bone. When they contracted, they pulled the leg backwards, powering a forceful running stroke.

Last year, Persons and Currie analysed the caudofemoralis of Tyrannosaurus to show that it probably ran faster than people had previously thought. But Carnotaurus was probably faster still. It could have been one of the fastest of all the large theropods, although Persons and Currie haven’t calculated a top speed yet. The duo found that the dinosaur had a particularly butch caudofemoralis. Its tail bones each have a pair of unusual crescent-shaped flanges that protrude off to either side. Persons and Currie think that these flanges – also known as “caudal ribs” – served as anchor points for an unusually large caudofemoralis muscle. It was larger for the animal’s size than that of any other theropod, and would have accounted for 15 percent of its total body weight. When Carnotaurus contracted this mighty muscle, it would have pulled its hind leg backwards with extreme force, allowing for “sudden, straightforward sprints and charges”.

But Carnotaurus paid a price for its speed. Its caudal ribs may have anchored a powerful running muscle, but they also made its tail very rigid. When theropods ran, they turned in an almost snake-like way, leading with their heads and following with necks, torsos, hips and tails. But Carnotaurus’s tail was so rigid that its entire back half would have had to rotate as one. It could dash hell for leather in a straight line, but tight turns were out of the question. Its prey could probably have dodged and weaved around it. Carnotaurus was one of the latest abelisaurids on the scene, and many of its contemporaries, like Skorpiovenator and Aucasaurus, also had caudal ribs. These species could probably have mustered the same bursts of speed. However, earlier members of the group had less distinctive tails, which suggests that these hunters gradually evolved to become sprinters. When Carnotaurus was still alive, it shared South America with a far larger group of theropods – the carcharodontosaurids, or shark-toothed lizards. These included some of the largest theropods that ever lived, including Giganotosaurus and Tyrannotitan, large enough to hunt truly gargantuan prey like titanosaurs. Persons and Currie think that Carnotaurus  and its ilk went the other way – evolving to chase smaller, nimbler prey with rapid bursts of speed. Perhaps they were the Cretaceous equivalents of cheetahs, sprinting after smaller prey while they left the bigger quarry to the more powerfully built lions. If an asteroid hadn’t finished off the dinosaurs, perhaps Carnotaurus would have eventually evolved go-faster stripes and a rear spoiler... Reference:

Image: by Lida Xing and Yi Lu More on theropods: