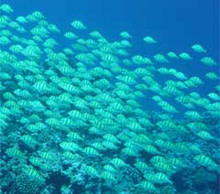 President Bush will establish three national monuments in the Pacific Ocean today in a move that will protect a vast marine ecosystem from mining, oil exploration, and commercial fishing.

With the stroke of a pen this afternoon, Bush will have set aside more square miles of ocean for protection than any other political leader in history. The three new monuments, surrounding far-flung islands, reefs and atolls scattered across the Pacific, will add 195,000 square miles of protected waters to the nearly 140,000 square miles around the Northwest Hawaiian Islands that Bush protected in 2006 [Los Angeles Times].

The United States has authority over these waters because the tiny atolls and islands are U.S. territories. The three areas are thronged with fish, sharks, coral reefs, and other forms of sea life, all of which will benefit from the new protections.

Blue-water fish such as yellowfin, bigeye tuna, and marlin--all in decline--will be big winners because they breed in these waters. So will sharks, birds, turtles, and dolphins accidentally caught by the tuna long-line fleets [ScienceNOW Daily News].

One of the new national monuments also encompasses the deepest location of the earth's crust. The Marianas Trench, which reaches depths of more than 36,000 feet in some locations, contains undersea volcanoes and hydrothermal vents around which cluster tough organisms that can withstand high temperatures and harsh chemicals. These "extremophiles" are of interest to scientists who think they signal forms that extraterrestrial life could take. Conservationists cheered the news:

Joshua S. Reichert, managing director of the Pew Environmental Group, called Bush's decision a historic moment -- coming 137 years after the U.S. turned Yellowstone into its first national park. "It's taken us 137 years to look at the world's marine environment in a similar way that we look at land," Reichert said. Bush's decision, he said, sends a message to the next president that more care needs to be taken to conserve oceans. "It sends a message to the rest of the world that these treasures deserve protection" [Los Angeles Times].

said curbing greenhouse emissions was also vital for the long-term preservation of corals. "Unless we deal with global warming, all other protective measures for coral reefs will be rendered meaningless," he said. "Ultimately, Bush's legacy as a climate criminal will far outweigh his ocean legacy, as any benefit coral reefs receive from this monument designation will be bleached away by warming seas" [BBC News].