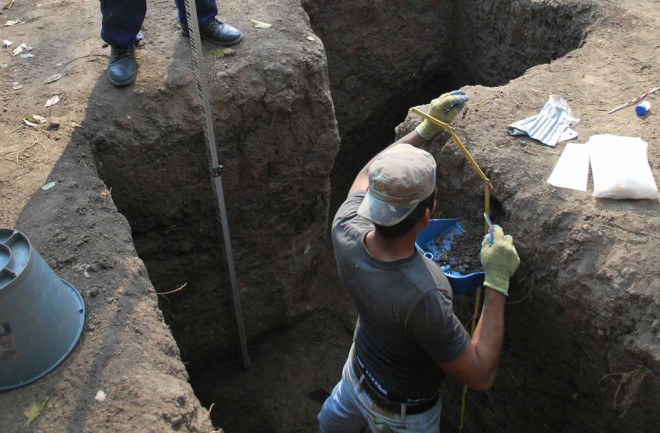 An excavation team works at an archaeological site in the "forest islands" of Bolivia, where scientists have found new insights into the complexities of the people who lived in the region as much as 10,000 years ago. (Credit: José Capriles/PSU) Charred earth, shells, bones and human burials found in mounds on a plain in northern Bolivia are offering scientists new clues about the earliest known inhabitants of the southwestern Amazon. The remains, excavated from raised areas known as “forest islands” on the Llanos de Moxos, an extensive savanna, show the area was inhabited between 10,600 and 4,000 years ago, according to new study published Wednesday in the journal Science Advances. “In the late Holocene, about 2,500 years ago, fairly complex societies began to develop that practiced intensive agriculture and created important settlements, but we didn’t know much about their origin,” says Bolivian archaeologist José Capriles, an assistant professor at Pennsylvania State University, and one of the study’s authors. Those societies built extensive earthworks and practiced farming in the Amazonian regions of southern Peru, central Brazil and the Llanos de Moxos beginning about 2,500 years ago, raising questions about how densely populated the region might have been before Europeans arrived. “Now we can see that they probably didn’t come from elsewhere, but probably developed here, beginning with these hunter-gatherers who likely were experimenting with crops and were the forerunners of those societies,” he added.

The region is dotted with "forest islands" that scientists still don't fully understand. (Credit: José Capriles/PSU) The remains suggest that a significant number of hunter-gatherers may have lived in the area. And this find also offers hints about how they lived on the savanna, which floods during the annual rainy season. The forested mounds that dot the Llanos de Moxos are a puzzle in themselves. One hypothesis is that they are remnants of ancient forests that disappeared as the region’s climate changed. Another is that they are forested patches that grew up in areas made particularly fertile by termite mounds. Some, however, like the three excavated by Capriles and his colleagues, are clearly the work of humans, who deposited layers of shells over thousands of years. One, which the archaeologists dubbed Treasure Island, was formed from shell deposits that built up between 10,600 and 4,000 years ago, and yielded snail shells, animal bones and a human burial In a second forest island, the researchers found three human burials, as well as peach palm (Attalea phalerata) seeds and the bones of small mammals and reptiles. A third, which probably formed at the edge of an ancient lake, contained few shells, but yielded animal bones, charred earth and another burial. The animal bones — including rodents, deer, some birds, and reptiles like snakes, turtles, lizards and caimans — provide clues about the diet of early foragers in the seasonally flooded wetlands. The burials indicate that people not only foraged in the area, but were laying claim to the territory. “Burials begin to appear when people want to legitimize their occupation of certain areas” by showing that their ancestors lived there, Capriles says.

The burials researchers discovered were so heavily mineralized that they couldn't hope to extract any DNA from the remains. (Credit: José Capriles/PSU) The skeletons had a high mineral content, which makes extracting ancient DNA from them difficult, but Capriles and his colleagues are continuing to analyze the human bones and plant remains. Their work fills in an important gap in the archaeological record by showing continuous human habitation in the Llanos de Moxos even during the middle Holocene, between about 8,000 and 5,500 years ago, says Brazilian archaeologist Eduardo Neves, who studies how early Amazonians used their landscapes and cultivated plants. South America became drier during the middle Holocene because of shifts in the annual monsoon. But even as sites in the Andes Mountains were abandoned during that time, probably because of drought, people apparently continued to thrive in the Llanos de Moxos despite the changing climate. And they probably experimented with plants. Studies of plant genetics and diversity have given researchers hints that crops like cassava, sweet potatoes, peanuts and some hot peppers were domesticated in the southwestern Amazon, but the actual archaeological evidence has been lacking. “Our studies show that not only were there people in the region, but there were also conditions that would have favored experimenting with crop domestication,” Capriles says. The three sites included in the study were abandoned before larger agricultural societies emerged, but that does not necessarily mean people left the region, he says. Future excavation of other forest islands should help complete the picture. Meanwhile, archaeological evidence shows that ancient people lived on the Llanos de Moxos much as semi-nomadic people did as recently as the mid-1900s, ranging across the plains for food and retreating to the forest islands when flood waters rose. “Perhaps the most interesting thing is that there were hunters and gatherers in these tropical regions, which people always considered very extreme because of their environmental conditions,” Capriles says. “Documenting those people’s existence provides continuity (between the past) and people who currently live in the region.”