Brontosaurus is Back! New Study Finds They Aren't Apatosaurs After All 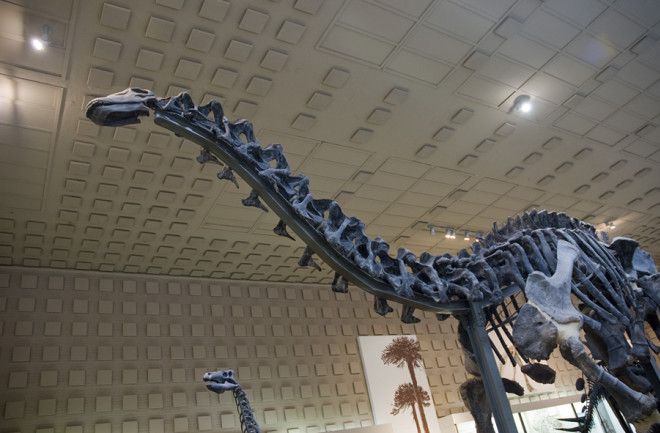 Specimen YPM 1980, at Yale Peabody Museum of Natural History, was first classified as Brontosaurus, then Apatosaurus excelsus, and in the current study is deemed Brontosaurus after all. Photo by Mark Ryan via FlickrBrontosaurus is one of the most recognizable of all prehistoric beasts, which is even more remarkable when you consider it only ever existed for a fleeting moment in history. In 1903, only a couple decades after it was discovered, Brontosaurus was demoted. Leading scientists at the time decided that the fossils found in the western U.S. were merely a species within the genus Apatosaurus. Museum specimens were renamed, textbooks were rewritten, and Brontosaurus was relegated to history’s dust heap. Today the iconic dinos don’t even have a Wikipedia page. But that may all be set to change once again. A new study, taking into account recently discovered specimens, claims to have set the record straight, establishing Brontosaurus as a scientifically valid genus once again.

The research, led by Emanuel Tschopp at the Unversidade Nova de Lisboa in Portugal, delves deep into anatomical details to investigate the evolutionary relationships of a large and important group of sauropods known as diplodocids. Diplodocidae is the dinosaur family that includes Apatosaurus, as well as other iconic dinosaurs like Diplodocus. These animals are renowned for their enormous body sizes, sweeping necks and small heads, and long, whiplashed tails, and are known from North and South America, Europe, and Africa. Tschopp and his colleagues took as objective an approach as possible in crafting their dinosaur lineages. Instead of the traditional approach, plotting how similar each species is to the others, they instead opted to use a specimen-based protocol: analyzing each individual animal, regardless of its previously assigned species. This technique, though time-consuming, allowed them to look exhaustively at variation within each species, as well as between different species. The advantage of this is that, since many individual diplodocid specimens are quite fragmentary or incomplete, they can be combined to form anatomically overlapping units for analysis. Tschopp identified nearly 500 key aspects of diplodocid anatomy, and used this as the basis to reconstruct how related the individual specimens are based on how many of these characteristics were shared. “The differences we found between Brontosaurus and Apatosaurus were at least as numerous as the ones between closely related genera, and much more than what you normally find between species,” explained Dr. Roger Benson, a co-author of the study from the University of Oxford. The findings were published in the open access journal PeerJ.

One of the reasons why researchers face uncertainty in taxonomy (the naming of organisms) is that there are no clearly set rules for what defines one species or genus from another. So while scientists are as objective as possible in the identification and naming of new species, this means that there is always a hint of subjective bias involved. This is especially so in paleontology, as the usual test for species independence through identification of reproductively isolated populations is a little difficult for animals that have been extinct for millions of years. So specimen-based anatomical comparisons are probably the best existing method to determine dinosaur relationships. In this case the research was bolstered by numerous dinosaur discoveries in recent years. By finding other dinosaurs that are anatomically similar to both Brontosaurus and Apatosaurus, researchers were able to better discern the small differences between them. Close examination of fossils used to originally name Brontosaurus showed that often previously overlooked aspects of its shoulder blade, vertebral column, and ankle bones were in fact unique to this animal, and enough to distinguish it from Apatosaurus. These include the shape of the chevrons, a series of bones underneath the vertebral column that many reptiles possess.

Study authors Emanuel Tschopp and Octávio Mateus inspect a Galeamopus skull. Image by Octávio Mateus And Brontosaurus actually appears to contain three distinct species, all from around 157-151 million years ago in the western U.S. This means that the biodiversity of dinosaurs at this time may have been much higher than previously thought. As if this wasn’t enough, Tschopp also noted that additional specimens from Colorado and Wyoming previously assigned to Diplodocus hayi were distinct enough to be independently assigned to a new genus, Galeamopus. As well as this, the new study shows that some genera are probably invalid, with Dinheirosaurus from Portugal being indistinct from another from the U.S., Supersaurus.

While this study might cause a few arguments in the scientific community, it is a nice hat tip to how scientific research truly progresses. Even hypotheses that have remained stable for 100 years can sometimes fail the test of time, and be overthrown based on new discoveries, new analytical methods, and a deeper understanding of how to evaluate evolutionary relationships. “It’s the classic example of how science works,” said Prof. Octavio Mateus, a coauthor of the study. “Especially when hypotheses are based on fragmentary fossils, it is possible for new finds to overthrow years of research.” But rarely will it overthrow years of research to the delight of dinosaur-lovers everywhere. Welcome back, Brontosaurus – you were sorely missed!