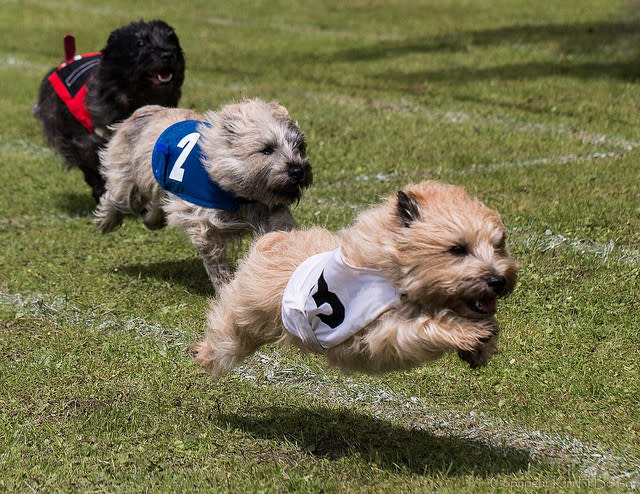 Is your dog a natural athlete or a couch pup-tato? The answer might depend on how far removed it is from its wild ancestors. Dogs that are more similar to wolves have kept more of their natural athleticism, while breeding has rendered other types of dogs a little...less impressive. Caleb Bryce, a PhD candidate at UC Santa Cruz, says his study of canine athletes came about serendipitously. "We were just hoping to calibrate a new wildlife collar we’ve developed," he says; he planned to test the collars on "a dog or two" before using the technology to study how wolves use energy. But the collars revealed so much variation between those dogs in energy use that Bryce and ecophysiologist Terrie Williams decided to investigate further. The researchers looked at 23 adult dogs, divided into three groups. One was "northern breeds," or sled dogs: these included Siberian huskies, Alaskan malamutes, and Samoyeds. Another group was Plott hounds, a dog bred for tracking game by scent. The third group was made up of retrievers, including golden retrievers and labs. High-speed cameras first filmed the dogs walking and running outdoors. Bryce and Williams used the recordings to measure each animal's speed and analyze the mechanics of its gait (How frequent are its strides? How long are its legs?). They calculated the speed at which each animal liked to walk, trot and gallop, then used those findings for the next part of the study. The dogs came indoors and repeated their walking and running on a treadmill set to each pup's preferred speeds. The treadmill was mounted inside a Plexiglas box called a metabolic chamber, which measured how much oxygen a four-legged athlete was using. "I was amazed at the diversity of dog temperaments I encountered," Bryce says. "Some took to the treadmill instantly, and others took months of dedicated training." Once the researchers finally got all their dogs treadmill-ing like gym rats, they saw that not all were equally talented athletes. Northern breeds outperformed the other dogs in aerobic endurance. "They're better long distance/duration runners," Bryce says. This "isn't terribly surprising," he adds, as these dogs were bred to pull sleds—but it's the first time he knows of that someone has addressed the question scientifically. Don't be disappointed if your yellow lab struggles to keep up on your marathon-training runs. The researchers also found that for northern breeds, a trotting gait was the most efficient way to move. "That's the gait in which they pull sleds for hundreds of miles over the course of days in brutal conditions," Bryce says. He points out that these dogs retain their athleticism even if they're household pets that have never actually hauled anything. He saw no major differences, though, between the hounds and retrievers in the study. Among the breeds Bryce and Williams investigated, the sled dogs are the most closely related to their wolf ancestors. "Hounds and retrievers are both relatively modern breeds compared with the ancient lineage that includes northern breed dogs," the authors write. So for hounds and retrievers, at least, breeding seems to have stripped away some of the animals' natural athleticism. Bryce doesn't have a dog. But "I'd love a dog someday," he says, "especially a sled dog." No offense, pup-tatoes.