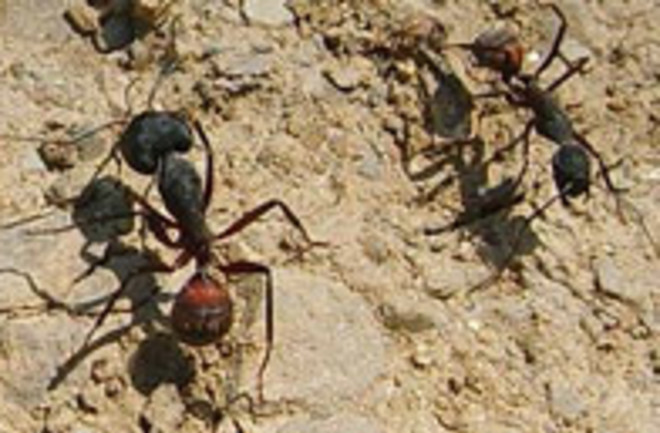 In a striking example of the evolutionary benefits of altruism, researchers have found a species of ants that sends a few workers out each evening on a suicide mission to ensure the continued survival of the colony. The tiny ant Forelius pusillus, which makes its home in sugar cane fields in Brazil, makes a nightly ritual of covering the entrance to its nest with sand. To be sure that the entrance is sealed shut tightly, a few ants remain outside each evening to finish kicking sand over the hole. Those ants, stuck outside in the cold and the wind, die during the night.

“In a colony with many thousands of workers, losing a few workers each evening to improve nest defense would be favored by natural selection,” said co-author Francis Ratnieks…. The ants stuck outside might be old or sick, [co-author Adam] Tofilski conjectured. Thus, they may have essentially sacrificed themselves for the greater good, being more expendable members of the colony [ScienceNOW Daily News].

The new study, which will be published in the November issue of The American Naturalist [subscription required], adds a new twist to the phenomenon of altruism and self-sacrifice among insects. There are many examples in nature of insects sacrificing themselves when a colony or nest is under attack, such as when bees use their stings to defend the hive and die in the process. But the door-sealing activities of these 2-millimetre ants … represent the first recorded case of insects sacrificing themselves through a premeditated and pre-emptive procedure [New Scientist].

It remains a puzzle what the ants are guarding their colonies against. [One entomologist] speculated that F. pusillus might be hiding from large, roaming colonies of army ants [ScienceNOW Daily News].

Delve deeper into the puzzle posed by cooperative insects in the DISCOVER interview with the scientist who first promoted the ideas of “kin selection” and “group selection,” E. O. Wilson.