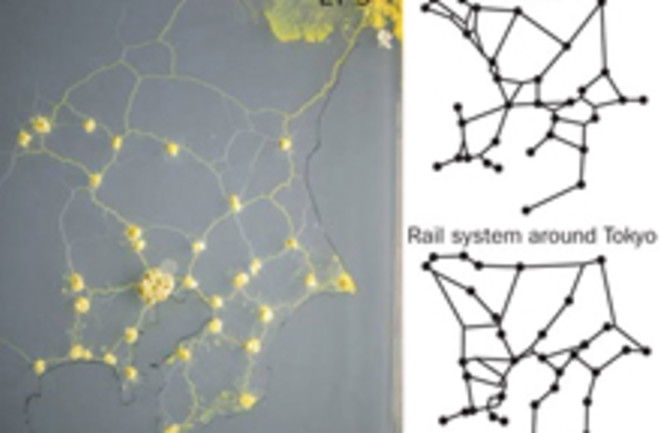 When scientists talk up learning about transportation networks from nature, it’s often ants that get the praise for being so much more organized and efficient than we humans with our silly gridlock. But a team of Japanese researchers found, for a new studyin Science, that you don’t even need a brain to be to a traffic genius. Single-celled slime molds, they found, can build networks as complex as the Tokyo subway system.

The yellow slime mold Physarum polycephalum grows as a single cell that is big enough to be seen with the naked eye. When it encounters numerous food sources separated in space, the slime mold cell surrounds the food and creates tunnels to distribute the nutrients [Science News]. To test how efficient the mold could be, Toshiyuki Nakagaki’s team duplicated the layout of the area around Tokyo: They placed the slime mold in the position of the city, and dispersed bits of oat around the “map” in the locations of 36 surrounding towns.

The mold explored slowly at first, but like any good transportation engineer it began to figure out traffic patterns. To continue growing and exploring, the slime mold transforms its Byzantine pattern of thin tendrils into a simpler, more-efficient network of tubes: Those carrying a high volume of nutrients gradually expand, while those that are little used slowly contract and eventually disappear [ScienceNOW Daily News]. When the mold got its system settled, researchers say, it looked rather similar to the actual Tokyo subway system, as you can see in the illustration.

The scientists didn’t just marvel at the slime mold’s mapped-out network; they also tried to capture its technique in math, Wolfgang Marwan added in an accompanying piece in Science. Marwan called the mathematical model “beautifully useful.” He added that: “It quantitatively mimics phenomena that can be neither captured nor quantified by verbal description alone” [Scientific American]. But will slime mold subways start to show us how we ought to be building our transport systems or other networks? Perhaps not so fast, says Portland State University’s Melanie Mitchell. “This paper uses only one relatively simple example,” she cautions. “It’s not obvious that similar experiments would work as well for matching other transport networks” [ScienceNOW Daily News].