Born to Be Mild

Are human beings evolution’s most successful story of self-domestication? 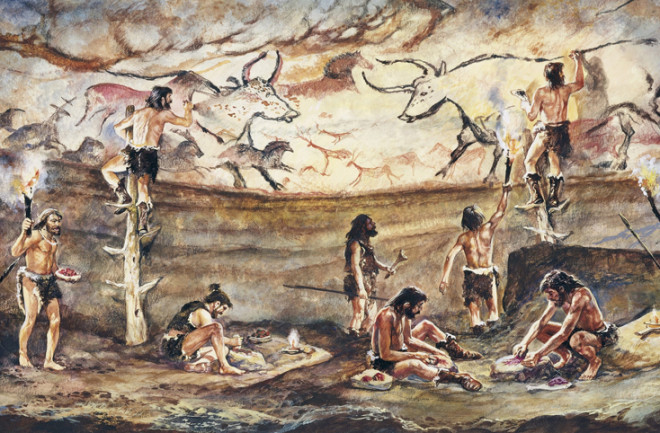 Forget, for a moment, about the ease with which human beings use tools and the inventive ways we express ourselves through art and language. The behavior that really distinguishes humans from other primates is that we can sit quietly in a theater full of strangers — dozens or even hundreds of us — and not fight or impregnate anybody by the end of the show.

“If you put a hundred strange chimpanzees in a room, there would be bloodshed,” says Steven Churchill, a paleoanthropologist at Duke University.

The ability to put up with each other and even cooperate when necessary was a key development in the evolution of our species. It helped our ancestors share knowledge, which allowed them to make ever more elaborate tools and eventually build entire civilizations. Evolutionary anthropologist Brian Hare, also at Duke, is part of a small group of scientists who think they might know how humans evolved this ability, sometime during the 5 million to 7 million years since we shared a common ancestor with other primates.

In the late 1990s as an undergraduate, Hare documented the ability of dogs to follow the gestures and gaze of humans to find hidden food. As a graduate student, he confirmed that this talent also existed in a population of foxes that, through artificial selection over generations, had been domesticated by Russian scientist Dmitry Belyaev. With other researchers, he discovered that selecting for tamer animals carries with it a suite of unintended evolutionary consequences — ranging from changes in appearance to new behavior traits — known as domestication syndrome. “The foxes were never selected to be good at interpreting human gestures,” says Hare. “It must be a byproduct of something else.” But that wasn’t the only byproduct.

Physically, dogs and foxes look like juvenile versions of their undomesticated counterparts. Behaviorally, they are not only less aggressive and more playful as adults, but also friendly in situations whereas wild foxes were fearful and violent. Hare saw a parallel in the apes he was studying. He noticed that adult bonobos — the closest relative of chimpanzees — look like juvenile chimpanzees in many ways. They also share the behavioral traits of domesticated animals, such as reduced aggression, despite never having undergone selective breeding. Hare and his colleagues call this phenomenon of natural selection for more cooperative behavior “self-domestication.” The researchers believe that humans underwent a similar process early in the evolution of our species.

Over the past 10 years, Hare has been observing apes at the Lola Ya Bonobo sanctuary in the Democratic Republic of Congo. He believes that bonobos have self-domesticated over the past million years or so, after their lineage separated from chimpanzees. The social differences between these two groups are striking despite being genetically very similar. Chimpanzees, like most apes, live in male-dominated societies and use violence to maintain their social status and coerce females into mating. Chimpanzees frequently attack and kill other chimpanzees that are strangers. Bonobos, on the other hand, live in societies dominated by coalitions of females and use sex to diffuse tension. Bonobos, however, are not entirely peaceful, and any male that attempts violence against a female is quickly ostracized. Bonobos also seem to enjoy, even prefer, the company of other bonobos that they have never met. Strangers are often greeted with play and sex.

How bonobos developed this kind of social tolerance without being bred for it may provide an interesting parallel to what happened early in human evolution. Owen Lovejoy, a paleoanthropologist at Kent State University, has spent his career studying the fossils of early hominids. He sees evidence in their bones that human ancestors were becoming less aggressive. In virtually all higher primates, males have large, sharp canine teeth that they often use to threaten and attack other males during competition for mates, says Lovejoy. According to Hare, a reduction in canine size is something that universally happens in domesticated mammals. Humans have evolved to have small, dull canines, meaning that, over time, they no longer needed to fight with other males to attract mates.

“In this case, it would have to be that females are choosing males with smaller canines, which means that they are choosing non-aggressive males,” Lovejoy says. He believes that our early ancestors attracted mates by providing them with food. According to Lovejoy, this reduction in canine teeth is first seen in the fossils of Ardipithecus ramidus, which were found in Ethiopia and dated to 4.4 million years ago. Lovejoy believes that these hominids probably had a more bonobo-like social structure where males were more likely to cooperate than fight. “All of the primary evidence we have in early [human ancestors] is anti-aggression,” he says.

The behavior of our species is a blend of the same tendencies seen in aggressive chimpanzees (above) and more social, prosexual bonobos. Anup Shah/Naturepl.com

Aggression Out, Agriculture In

It’s hard to pin down the biological basis for the changes that took place in early human ancestors and domesticated animals as they developed lower levels of aggression. No one is sure which genes are involved in domestication, but they may have something to do with controlling the release of cortisol and testosterone, the hormones involved with fear and competitive behavior, into the bloodstream.

“There are maybe 10 genes, or 50, or hundreds involved in domestication syndrome,” says Carlos Driscoll, chair of conservation genetics at the Wildlife Institute of India of the National Institutes of Health. Driscoll was part of a team that analyzed the genomes of domestic and wild cats to understand the biology of domestication.

With the dawn of agriculture more than 10,000 years ago, our ancestors began settling in villages and living in larger groups, making tolerance of other people and cooperative behavior increasingly necessary. That lack of competitive drive may show up in the faces of modern men. Males with generally higher testosterone levels are known to have thicker brow ridges and cranial bones than men with lower testosterone. High testosterone also makes people prone to competitive rather than cooperative behaviors. Churchill and Hare were part of a group that studied a sample of Homo sapiens skulls dating from 200,000 years ago through to the present. While the study couldn’t control for every variable that might have affected the shape of the skulls, the trend the researchers found was toward thinner craniums and less prominent brow ridges starting around 80,000 years ago and possibly earlier. This trend was more pronounced in the most recent samples, from individuals who lived in villages or cities, than it was in hunter-gatherers who tended to live in smaller groups.

Bonobo social tolerance may also be related to the hormones that the animals’ bodies produce when reacting to stressful situations. When they anticipate having to compete for food, bonobos show a spike in the amount of the hormone cortisol, which is associated with fear and anxiety. Chimpanzees, on the other hand, show a spike in testosterone. According to Hare, some of the differences between chimps and bonobos may be rooted in these hormonal differences. The more aggressive chimpanzees are likely to deal with competition through violence while bonobos are more likely to calm themselves through sex.

Despite the millions of years since we shared a common ancestor, humans still retain some tendencies in common with chimpanzees. Churchill believes that human behavior is actually something of a mosaic of traits demonstrated by chimpanzees and bonobos. “In some respects, we are very chimpanzee-like. We have a remarkable propensity for violence and warfare,” he says, “and in some respects, we can be very bonobo-like. We can be very prosocial and sexual.”