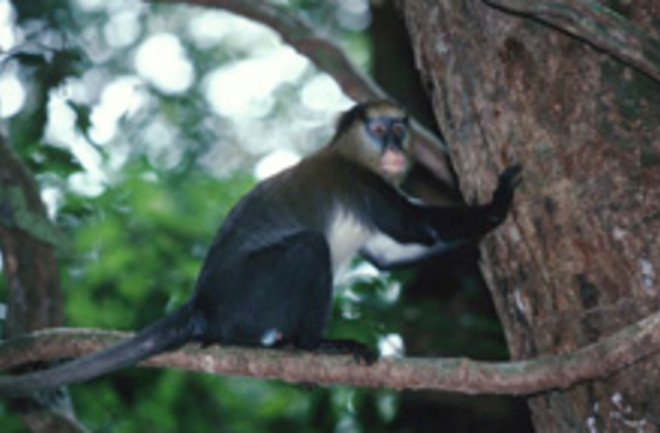 Birds, whales, monkeys, and other animals constantly demonstrate simple communication through a variety of sounds. But one thing that has always separated them from humans, scientists thought, is that they haven't achieved syntax—stringing together multiple different sounds to create another meaning, or what we might think of as a sentence. Now, in a study published in yesterday's Proceedings of the National Academy of Sciences, researchers argue that they have observed monkeys using these rudimentary rules of grammar. Klaus Zuberbühler and his team previously established the meanings of specific calls among the Campbell's monkeys in the Tai National Park of the Ivory Coast, like the sound they dubbed "krak," which by itself means a leopard approaches. This time, however, they documented call combinations.

The monkeys can vary the call by adding the suffix “-oo”: “krak-oo” seems to be a general word for predator, but one given in a special context — when monkeys hear but do not see a predator, or when they hear the alarm calls of another species known as the Diana monkey [The New York Times]

. The PNAS paper contains many more examples. "Boom boom" means to gather together, the scientists say, but "boom boom" with a few "krak-oos" afterward meant that a tree branch is about to give way, so look out. "Hok hok hok," they say, is also an alert, but one pertaining to a different manner of death from the skies: crowned eagles. These combinations could be the first demonstration of monkey syntax, researcher Alban Lemasson says.

“People have criticized the use of ’syntax’ to describe animals just because they produce sequences of sound. They say that each unit has no meaning, that no rules explain how they’re combined,” said Lemasson. “Here we have rules of combination” [Wired.com]

. In humanity's efforts to teach language to primates, researchers had been unable to see such a syntactic ability in them. Perhaps, however, we were trying to teach them our way of communicating rather than trying to find theirs. Jared Taglialatela, a specialist in chimp communication, said that Zuberbühler's study certainly shows primate syntax, but that we shouldn't go too far in thinking the monkeys are developing a language like ours.

“People like to draw lines and make boxes and put animals inside them. I don’t like to do that. There are differences and shades of grey. And when you take the time to collect data in a way that allows you to recognize complexity and patterns, than you find evidence of them” [Wired.com]