The adult apes use juvenile behaviors to seek comfort from groupmates, telling researchers human emotions may have ancient origin roots. 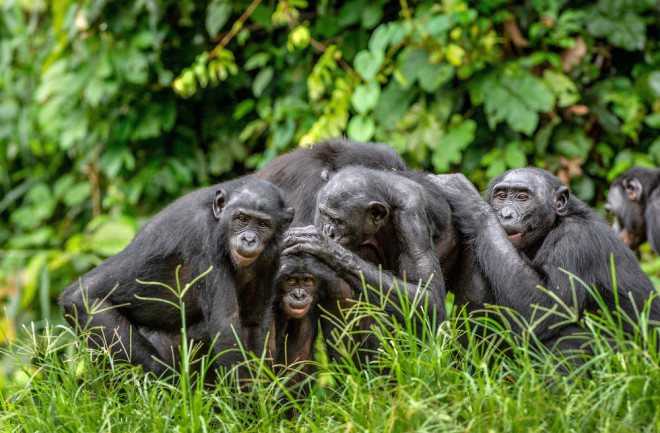 There’s a viral TikTok video with over 300 million views showing a distressed toddler crying to her mom, “I’m just a baby!” Acting childish might not get the toddler what they want, but according to new research, it might help a beleaguered bonobo.

Bonobos are one of our closest living ancestors. Affectionately called the “make love, not war” ape, they’re famous for their social tolerance, acceptance of out-groups and eye for emotions.

In a new study, researchers discovered that attacked bonobos use baby-like behaviors to call for help, most frequently around large crowds. The findings suggest that bonobos selectively convey their distress when it’s most impactful. Flexibly displaying emotions was previously thought to be uniquely human, but the new finding could indicate a more ancient origin.

“Our research shows that emotions and their expression do not only play a role in the regulation of social life in our own species, but also in our closest living primate relatives,” says author Raphaela Heesen of Durham University in the U.K. in a press release.

The team studied how bonobos responded to attacks from others at the Lola ya Bonobo Sanctuary in the Democratic Republic of Congo. As the only bonobo sanctuary and rewilding program in the world, the population includes individuals rescued from the bush meat trade, as well as ones born in a haven.

The scientists observed two groups of about 20 individuals for two summers. They noted when victims got attacked, how they behaved afterwards and whether others came to console them. They also counted how many other bonobos were nearby and quantified their social bond strengths with the victim. The team was especially interested in baby-like behaviors, which included tantrums, pouting and reaching for help.

Bonobos were more likely to console attacked ones that performed childish acts. Their assailant was also less likely to mug these individuals again.

What’s more interesting, the authors write, is when bonobos chose to deploy the signals. They used juvenile behaviors for longer when larger crowds were around to hear them. Additionally, attacked bonobos stopped crying for help once a groupmate approached them.

“Bonobos are highly sensitive to social situations and who is surrounding them,” Heesen says. They “communicate their emotional states in flexible ways to influence their group members.”

Some experts argue that the ability for humans to controllably express feelings might have helped us maintain complex social groups. If it’s true, this would eventually lead to language and the ability to convey complex emotions. It’s possible that such emotional control could have evolved before humans split from bonobos and chimps, the authors say, but scientists need more data from other apes to know for sure.