Somewhere on the side of your thigh bone, there is a tiny hole. It’s called a “nutrient foramen”. An artery passes through this gap, suffusing the bone with blood and oxygen. The hole is found in all thigh bones, from those of birds to lizards, and it always fulfils the same function. But it can also double as a keyhole into the past, allowing us to peek at the lives of animals long extinct. Roger Seymour from the University of Adelaide has used the size of these holes to show that many dinosaurs of all sizes led active lifestyles. Seymour measured the nutrient foramina in the thigh bones of almost a hundred animals, and found that, in general, bigger animals have bigger bones and bigger holes. But those of mammals are around twice as big as those of similarly sized reptiles. Combined with the fact that mammal blood has a higher pressure than reptile blood and carries more oxygen, Seymour estimates that mammal bones receive around 54 times more oxygen than reptiles ones do. This all makes sense. When they’re doing exercise, mammals have higher metabolic rates than reptiles and they need more oxygen to fuel their activities, just as a race-car needs different pipes than a Mini, in order to cope with its more powerful engine. There are two exceptions. Seymour found that in terms of foramen size, monitor lizards clustered with mammals. These lizards are active hunters that can even chase down mammal prey. Thanks to a unique “gulping” style of breathing, monitor lizards have exceptionally high metabolic rates for reptiles, and their thigh bones have unusually large foramina to match. Seymour also showed that the foramina of 10 dinosaurs, from Centrosaurus to the towering Girraffatitan, were even larger for their size than those of mammals, and much bigger than those of comparable reptiles. Seymour says that these fossilised holes “support the ever-growing evidence that some dinosaurs were highly active animals” that ate a lot, grew quickly, and were capable of intense bursts of activity. Does this mean that dinosaurs were warm-blooded? Not necessarily – after all, monitor lizards manage to have high metabolisms without generating their own body heat. But certainly, Seymour thinks that each dinosaur in his study led a “routinely highly active and aerobic lifestyle.” By Seymour’s own admission, this is a “preliminary study”. The species he studied are largely Australian ones, so the trends look slightly different in other parts of the world. The size of the foramina might also be affected by an animal’s evolutionary history, the number of legs it walks upon, or the environment it lives in. Nonetheless, with a bit more data, the size of the foramen could be an easy way of assessing the lifestyle of an animal by doing little more than measuring a hole in its bone. 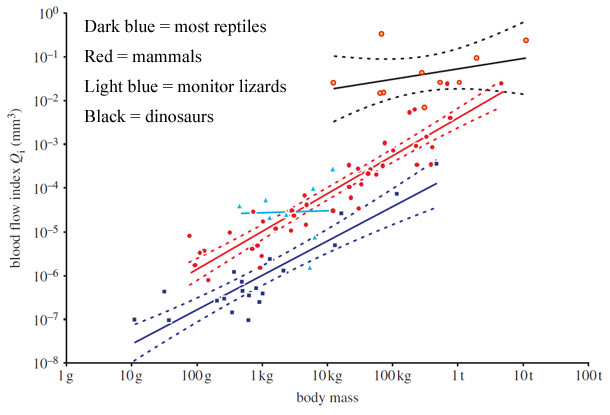