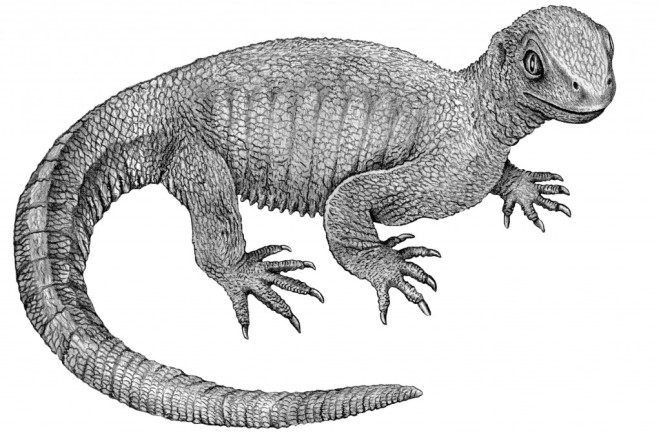 Pappochelys rosinae lived during the Triassic Period, about 240 million years ago, and was an early, shell-free member of the turtle lineage. New research has identified bone cancer in an individual of the species. (Credit: Wikimedia/Rainer Schoch) While many people think of cancer as a modern plague, researchers continue to find examples of tumors in animals much older than our own species. Discovery of bone cancer in a very early member of the turtle lineage, which lived 240 million years ago, reveals new information about the disease and just how long it's been a scourge to living things. The aggressive osteosarcoma was found in the femur of Pappochelys rosinae, a roughly 240 million-year-old reptile. Though you might mistake Pappochelys for some type of lizard by outward looks alone, paleontologists who first described it in 2015 believe the shell-free animal was one of the earliest species in the turtle family tree. Aggressive Tumor The fossil, a left femur of the proto-turtle, was collected in Germany in 2013 and measures less than two inches long. Its abnormality is obvious even to the naked eye: Much of the upper portion of the bone is covered with an irregular growth.

The cancerous mass identified on the femur of a Pappochelys specimen can be clearly seen in the upper half of the bone. Scale bar represents 1 cm. (Credit: Haridy et al, doi:10.1001/jamaoncol.2018.6766, courtesy of JAMA) Using micro-CT scanning, researchers were able to visualize high-resolution cross-sections of the bone and attached tumor. The images allowed the team to determine that, despite its extent on the outside of the bone, the cancer remained a surface lesion. Additional analysis confirmed the growth was likely periosteal osteosarcoma; the same type of bone cancer, while rare, can be found in humans today. The tumor that afflicted a poor Pappochelys some 240 million years ago is the oldest evidence of this type of cancer in an amniote, a lineage of four-limbed vertebrates, or tetrapods, that includes reptiles, birds and mammals. The research appears today in JAMA Oncology.