Boat Made of Recycled Plastic Bottles Completes Its 9,000-Mile Voyage 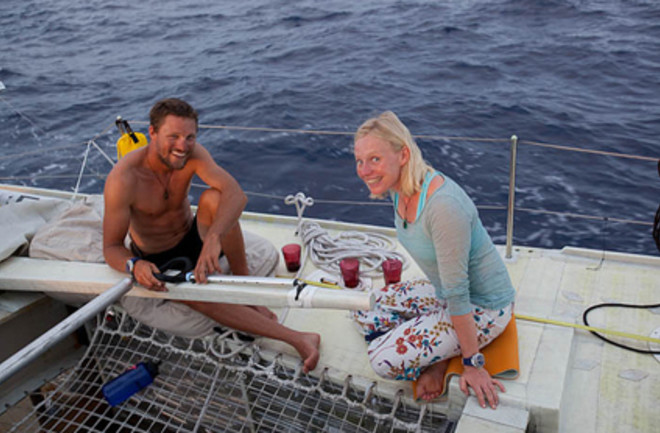 After floating on plastic for more than 9,000 miles, the crew of the Plastiki arrived in Sydney, Australia today, more than four months after the ship set sail from San Francisco. The boat of 12,500 bottles was the brainchild of David de Rothschild, who sought a way to bring more of the world's attention to the problem of discarded plastic bottles and their tendency to wind up in the ocean.

He figured a good way to prove that trash can be effectively reused was to use some of it to build a boat. The Plastiki ... is fully recyclable and gets its power from solar panels and windmills. The boat is almost entirely made up of bottles, which are held together with an organic glue made of sugar cane and cashews, but includes other materials too. The mast, for instance, is recycled aluminum irrigation pipe [AP].

The crew of six spent their four-month voyage cramped together in the catamaran's cabin, taking showers in salt water, and eating dehydrated food. But they didn't leave all the comforts at home behind. The team's filmmaker managed to get a Skype connection at sea, which he used to witness the birth of his first child.

Storms and inconveniences aside, the crew sailed through environmentally important sites like the Great Pacific Garbage Patch and into Sydney on schedule, showing that sailing is a much better use for old plastic bottles than just throwing them away.

"The story that has been told to us about plastic is that it's cheap, it's valueless, it's non-toxic, it's easy to use, and don't worry about throwing it out because we can just make some more," said de Rothschild. "The reality is it's not cheap, it's not non-toxic, it's not valueless. It's valuable, it uses a lot of resources.... We need to start taking a serious look at the way we produce and design every product we use in our lives" [National Geographic].

Now, the bottle boat is going on temporary display at Sydney's Australian National Maritime Museum as a nod to low-tech boating, which inspired the Plastiki's name.

De Rothchild named the craft "Plastiki" in honour of the original Kon-Tiki voyage in 1947 by Norwegian explorer Thor Heyerdahl who sailed 4,300 miles on a raft made from balsa wood and other materials from South America to the Tuamotu Islands in French Polynesia in the Pacific Ocean [Reuters].

80beats: Will California Be the First State To Ban the Plastic Shopping Bag?

80beats: Plastic-Devouring Bacteria Could Keep Soda Bottles Out of Landfills