Blueprints for Mouse Burrows Coded in Their DNA 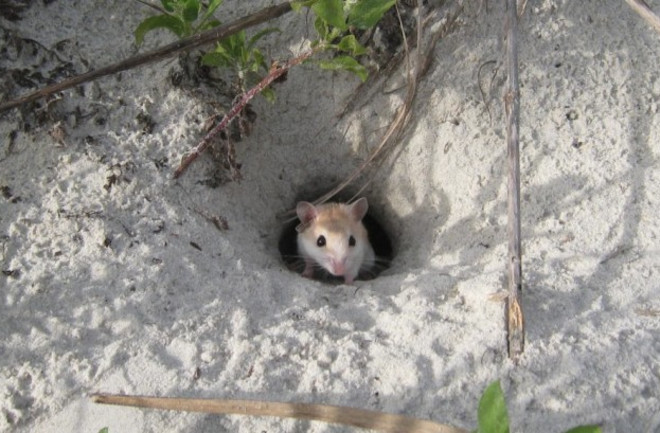 Image credit: Vera Domingues/Hopi Hoekstra, Harvard University A burrow is just a hole in the ground, right? Wrong. Different species of mice have very different burrow designs, and a new study suggests that a mouse's architectural know-how is written in its DNA: Mice constructed these species-specific burrows even when they had never seen one before. Researchers examined the burrowing behaviors of two related mouse species. The deer mouse makes a simple burrow, just a short tunnel that leads to a nest. The closely related oldfield mouse puts a little more feng shui in its design, extending the entry tunnel and adding a back door for quick escapes from the nest. To see if the blueprints for these burrow designs were based on instinct, researchers brought the mice into the lab. The mice reproduced in the lab and researchers raised the offspring of each species in cages, free from the influence of their natural habitat. When the mice were mature, researchers released them into a sandy environment to see what they would do. The mice of each species knew exactly how to build their burrow, and they built them according to the design of their respective species, according to the report published yesterday in Nature. Because the mice did not have the opportunity to learn by example when they were young, the researchers say the behavior is pre-programmed. If genetics is indeed running this show, that means different combinations of genes could produce new types of burrowing behavior. When the researchers crossbred the two species of mice, the babies grew to build the complicated burrows of the oldfield mice, leading scientists to believe that these genes are dominant. Researchers analyzed which parts of the genome were associated with the burrowing behaviors---digging a longer entrance and adding the escape tunnel---and they found that each was linked to particular regions of the genome, confirming that the two are genetically distinct. Next on the researchers' to-do list is determining which specific genes code for burrow-building behavior. They think it may be as few as four.