When Jesse Garza trained a video camera on his backyard earlier this summer he was trying to get to the bottom of a simple mystery — why a blue heron was hanging around his suburban neighborhood. But it didn't take long for him to discover the answer: This statuesque, water-loving bird was on a hunt for lawn gophers. Thanks to a well-timed video shoot Garza captured the whole thing on camera. "Huh!" he's heard to exclaim. "I didn't know that that's what they ate." Neither did we, Jesse.

Blue herons' diet mainly consists of fish, but they do eat crustaceans, insects, small mammals and even small birds as the opportunity arises. In this case, though, the heron was clearly taking the initiative, stalking the gopher like a pro. Herons have been known to choke to death while trying to swallow large prey, but [spoiler alert] this guy manages to get it down okay. It may even be a game of whack-a-mole for the bird: other YouTube videos show herons hunting moles and not even eating them. Nature, red in tooth and claw. And in toothless skinny graceful beaks, apparently. 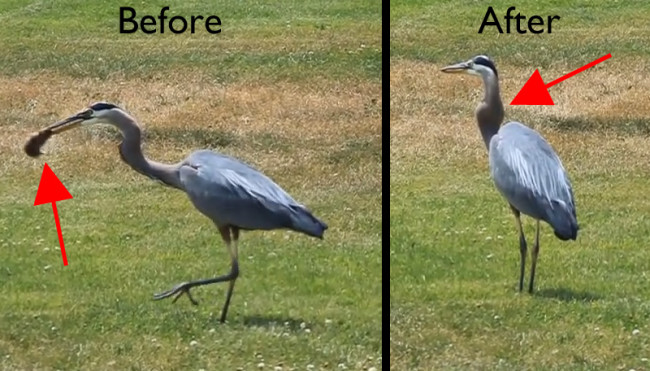