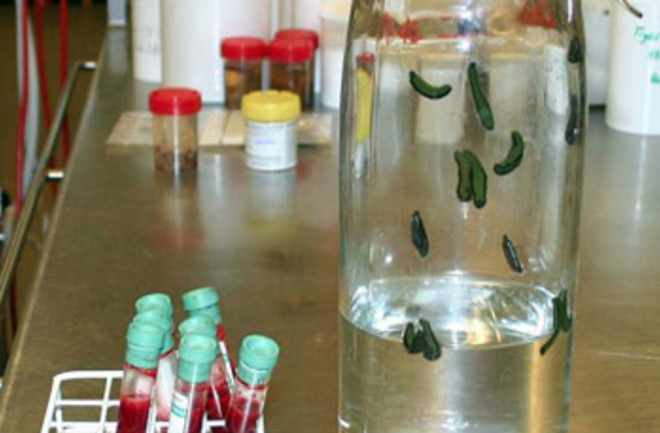 What’s the News: Scientists searching for new and endangered species in tropical highlands face a Catch 22. Spotting shy creatures is the order of the day, but bushwhacking through forests is anything but subtle. How can you get a sense of what’s there when you can’t get close enough to see it?

Environmental DNA analysis is one of the answers—checking out the DNA in soil, for instance, can reveal what pooped there recently in amazing detail. But for a technique that can reach beyond a given patch of ground, scientists have been investigating using leeches from streamwater as their source of DNA. It turns out that blood from their last meal sticks around in their gut for a good long time, and they happen to be partial to human blood too—which makes them, in the scientists’ words, “easy to collect.” A new papergives proof that the technique is valuable: blood in leeches collected from a Vietnamese rainforest reveals the presence of six mammalian species, some of them rare.

Gilbert, his colleague Mads Bertelsen and their team had fed goat blood to medicinal leeches (Hirudo spp.) — something that is “a lot harder than it sounds”, says Gilbert. The team resorted to tempting the creatures with blood-filled condoms warmed under a heat-lamp…After killing the leeches over the course of several months, the team identified goat DNA in every one of them.

The Future Holds: Collecting leeches is easy, as long as you’re warm-blooded and don’t mind standing in a stream, and DNA analysis of this sort is cheap. This method also has the benefit of telling you how recently an animal’s been in the area—blood in a leech gut doesn’t last forever; in the field it seemed only blood from the last feeding was showing up—so you know you’re not getting an old signal. The researchers hope, with good reason, that this technique will become a bigger part of ecologists’ field toolkit.