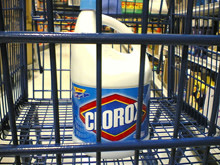 The germ-fighting power of bleach lies in its ability to unravel cellular proteins, according to a new study. Researchers at the University of Michigan report that the active ingredient in bleach, hypochlorous acid, irreparably alters the three-dimensional structure of proteins in living cells—to fatal effect. They also found that some bacteria possess a special protein that can somewhat counter the ravages of hypochlorous acid. The findings clear up a hitherto murky understanding of how the common household cleaner does its job.

"Everyone knew that bleached worked, and that was enough," says [researcher Ursula Jacob]. "Few really cared how it worked" [Nature News].

In fact, Jacob's team didn't set out to answer that question either. They were studying a bacterial protein known as heat shock protein 33 (Hsp33) that helps other proteins maintain their proper shapes. Hsp33 is activated in times of stress, such as when the bacteria is exposed to high temperatures.

"At high temperatures, proteins begin to lose their three-dimensional molecular structure and start to clump together and form large, insoluble aggregates, just like when you boil an egg," said study lead author Jeannette Winter... Like a boiled egg, those proteins can never revert to their previous state, and the stressed cells eventually die [LiveScience.com].

Jakob's team figured out that bleach and high temperatures have very similar effects on proteins. When they exposed the bacteria to bleach, the [Hsp33] became active in an attempt to protect other proteins in the bacteria from losing their chemical structure [Reuters].

When the researchers studied

But even bacteria with Hsp33 are typically no match for the protein-destroying effects of hypochlorous acid, the researchers report in

genetically engineered to lack Hsp33, they noticed that these bacteria were much more vulnerable to bleach.

[subsription required], which is why bleach is such a potent disinfectant.

Bleach may have additional mechanisms of killing microbes, but the new understanding of hypochlorous acid's role may have other implications beyond the toilet bowl. The human body naturally makes its own hypochlorous acid to fend off microbial attackers, but a surplus has been associated with age-related diseases such as arthritis, stroke, and Alzheimer's disease [Scientific American]. It's also believed that hypochlorous acid causes tissue damage in areas of chronic inflammation.

Related Content: 80beats: Whoops! Antibacterial Wipes Can Spread Disease Discoblog: Want to Get Away With Murder? Use a Special Detergent