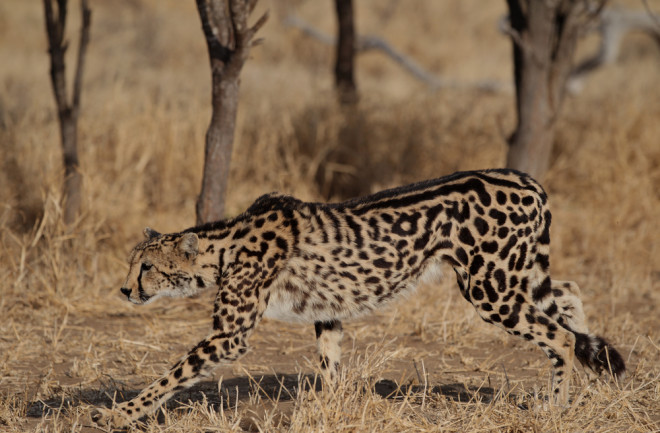 A king cheetah bearing the distinctive black stripes down its spine. Cheetahs are officially listed as a vulnerable species, and their numbers are on the decline; so the successful birth of cheetah cubs is always an event worth heralding. However, when you’re talking about a litter with the rare king cheetah gene, the novelty factor notches upward significantly. Just over a week ago, a cheetah named Meg at the Hoedspruit Endangered Species Centre (HESC) in South Africa gave birth to four cubs that are carriers of the gene for king cheetah markings. King cheetahs are noted for their distinctive blotchy spots and stripes that look a bit messier than “traditional” cheetahs. And fortunately for us, the entire birth was caught on camera, making the event all the more exciting. The birth took a few hours, but you can watch the miracle of life unfold below in minutes.

King cheetahs were once thought to be a distinct species, resulting from the interbreeding of cheetahs and leopards. But in 1981 zookeepers realized that king cheetahs were a mutant breed after two captive spotted females gave birth to a king cheetah. Three decades later, scientists identified the gene responsible for making a king — the same gene that turns a mackerel-striped tabby cat into a blotched tabby. In order to give birth to a king cheetah cub, both parents must be carriers of the recessive allele — hence their rarity. Although Meg isn't a carrier of the king gene, her partner was; therefore, her cubs aren't king cheetahs, but they are carriers of the gene. If the cubs go on to reproduce with another carrier of the gene, their offspring might then be full-fledged king cheetahs. Currently, the staff at the HESC is keeping its distance from the mother and cubs so they can bond in the most natural way possible. However, you can watch a live, 24/7 broadcast from the cheetah den to keep tabs on the new family.