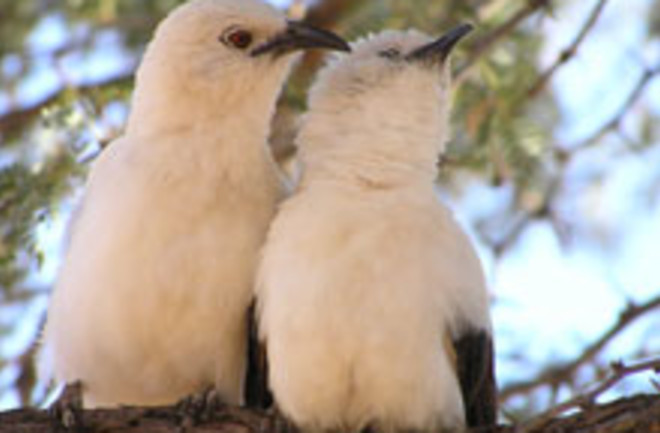 Bird cheaters beware: They're watching you. Two recently published studies, one in Science and one in Nature, have asked what bird benefits come from remaining faithful--or cheating on the down-low. Don't Cheat Analyzing the breeding habits of 267 bird species, two researchers have found that it may pay for some birds to stay true to their partners. Cooperative breeders--birds that help raise each others' young--appear to be more monogamous. Researchers looked at the number of broods with a half brother or sister, the products of a mother bird's free-loving ways. Cooperative birds' cheating rate averaged around 12 percent, while noncooperative birds around 23 percent. Also, the most promiscuous cooperative birds appeared to receive less help from other birds in the nest. These findings support the theories of evolutionary biologist Jacobus Boomsma (who wasn't involved in this study), who has tried to explain the puzzle of cooperative behavior that doesn't directly benefit the helpful individual. Boomsma believes that social animals cooperate to raise their relatives' offspring as a roundabout way to pass on the family genes, but argues that monogomy is a necessary condition for this to work.

[With monogamous pairings] all siblings are equally related to each other and to each parent. Promiscuity, on the other hand, leads to many half-siblings and lowers the relatedness of individuals in a group. [ScienceNOW]

Cheat Though female Gouldian finches might not like to kiss and tell, they do like to kiss. And by kiss, we mean mate with multiple males and then pick the best of their sperm. The birds come in a variety of head colors and their best chance of having healthy offspring comes from mating with birds of the same colored head. Lead author Sarah Pryke toldLiveScience:

"What this study has shown is that, if you do cheat on your male, if you are able to do it in such a way that they don't find out then the benefit can be absolutely huge for the female." [LiveScience]

Though scientists aren't sure how the birds pick from their multiple mates' sperm, which can stay in the female's reproductive tract for 12 to 13 days, they note that even if they cheat with a bird of the same head color only once, it can father up to 75 percent of the brood. Coauthor Simon Griffith said:

'The female is apparently able to select out genetically good sperm from bad sperm,'' Dr Griffith said. ''It's like a lottery where you rig the lottery.'' [The Sydney Morning Herald]

Still, even if two matching bird heads make a pair, that won't save the male from a cheating female. Though the females may ultimately use the sperm from the more compatible mate, the researchers found that they won't forgo the offer to cheat regardless of head color. Related content: 80beats: Male Cleaner Fish Punish Females Who Piss off The Boss Fish 80beats: Ants That Illegally Procreate Are Revealed By Their Guilty Smell 80beats: Finch Mothers Can Subconsciously Control the Gender of Their Little Ones DISCOVER: The Mating Game's Biggest CheatersImages: Sarah Knowles,