Birds hit windows because they can’t tell if the glass is a solid object. Shiny skyscrapers in particular pose a significant risk to migrating flocks. But there are easy solutions that can prevent these bird-window strikes from happening. 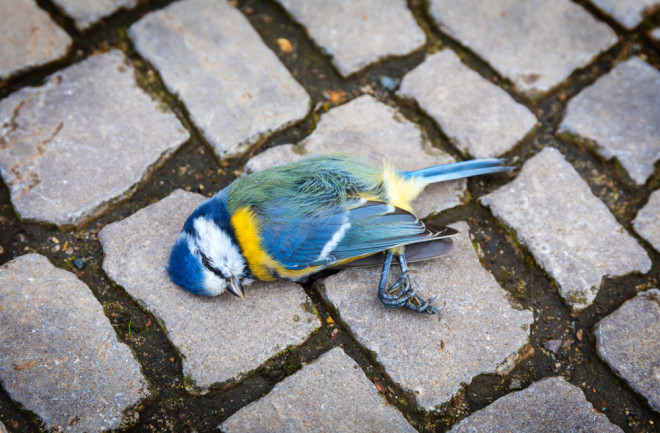 A dead titmouse bird laying in the street. (Credit: pixelklex/Shutterstock)

Window collisions kill up to a billion birds each year — that’s billion with a “b.” We’ve known about this for decades, and these casualties far outnumber birds poisoned by pollution, hit by cars or other direct causes. The only worse offender is domestic cats, who are estimated to kill somewhere between 1.3 and 4 billion birds annually.

Deaths-by-window peak during migration season, when billions of birds take to the skies at night with their sights set on a destination far away. Within recent years, researchers and conservation groups are getting innovative, using tools like radar to figure out new ways to keep these birds flying safely on their way.

Birds, of course, don’t mean to fly into buildings. It’s the reflectivity of the windows that tricks them — they don’t perceive shiny glass as a solid surface. The mirrored windows seen on skyscrapers look especially like an open sky. But even regular glass can fool birds: Any reflectivity can make a window look more like vegetation or sky than solid wall.

Most collisions occur at night, when a city’s artificial light is especially disorienting — even attractive — to birds. Researchers are still figuring out why. Jared Elmore, an ecologist at Mississippi State University, explains that when you consider the entire 150-million-year-or-so timeline of birds’ evolution, artificial lights and tall buildings are both rather new phenomena. “It’s different than probably anything else they’ve encountered in their evolutionary history,” Elmore says.

Read more: The Annual 9/11 ‘Tribute in Light’ Really Messes With the Birds

Like commercial airplanes, migrating birds have a preferred cruising altitude that’s high in the sky and well out of harm’s way. But buildings block them during takeoff, landing or whenever they’re flying low, like during inclement weather. And when birds fly into windows at full speed, the impact overwhelms their little noggins. Elmore says window-killed birds are often found with broken beaks, evidence of how hard they collided.

Estimates of window-provoked bird mortalities are relatively accurate because ecologists can walk the perimeter of glassy buildings each morning and count the dead. But it’s much harder to estimate how many birds collide with windows and fly off to live another day — or how many depart and eventually die from their injuries.

How to Prevent Bird Window Accidents

A significant predictor of these incidents is window width — bigger windows on bigger buildings kill more birds. Researchers have analyzed how other factors like weather and broader migration patterns can signify how many birds will die from collisions in a given place on a given night, in hopes that society can apply that information to prevention measures. According to Elmore’s recent research in the Journal of Applied Ecology, weather radar-estimated migration numbers can gauge the total window collisions on a given night.

This is especially useful because studies have shown that turning out the lights can protect migrating birds. But most cities aren’t going to want to go dark all the time. “If you could tell building managers, ‘Hey, if you cut out your lights tonight, you could save X number of birds,’ it may be more impactful,” explains Elmore. “They may be more likely to turn their lights off on a few nights out of the year rather than trying to make them turn out their lights all the time at night.”

Researchers have created tools that will help people identify nights where bird activity will be the highest, in hopes that more people will opt to flick off the lights when it matters most.

Fending Off Avian Crashes at Home

Daytime window collisions, like when a bird collides with your sliding patio door, can also kill birds. These bumps occur during birds’ day-to-day activities, especially during the breeding season. Luckily, those of us with access to our exterior windows, like at an apartment balcony or a house, can warn birds of glass threats.

Anything that makes the window look solid from the outside will reduce collisions, says Elmore. “Even just putting up blinds can help — in my house right now I have blinds in all my windows, but I don’t pull the blinds up all the way, I just open them so there are still slats going across,” he explains. There’s also a number of commercially available stickers that you can apply to the outside of your window that come in cute shapes like, appropriately, birds. But Elmore says the design doesn’t matter.

“It’s more about the placement and making it so the bird thinks they can’t fly through without hitting,” says Elmore. To deter birds, you want a maximum 2-inch gap between stickers or blind-slats. “Any farther apart and a lot of the smaller songbirds will still think they can fly through the open spaces,” he says. “It makes sense if you think about it — like warblers that are used to feeding in trees. They’re used to flying through really small openings between limbs.”

If you happen to find a bird that survived a window incident, it might be stunned from the impact. Elmore recommends putting it in a small, dark shoebox to prevent it from flying around and further injuring itself. The bird will likely need a few days to recover, so your best bet is to find a wildlife rehabilitation facility near you. “What you definitely don’t want to do is leave it where cats or other predators can get to them,” he says.

Going forward, Elmore is optimistic about the comprehensive findings on the causes and consequences of annual avian-window collisions. “I think we know a lot,” he says. “We know a lot about why birds collide, and when they collide. I think now we really need to move into the phase of preventing and conserving birds.”