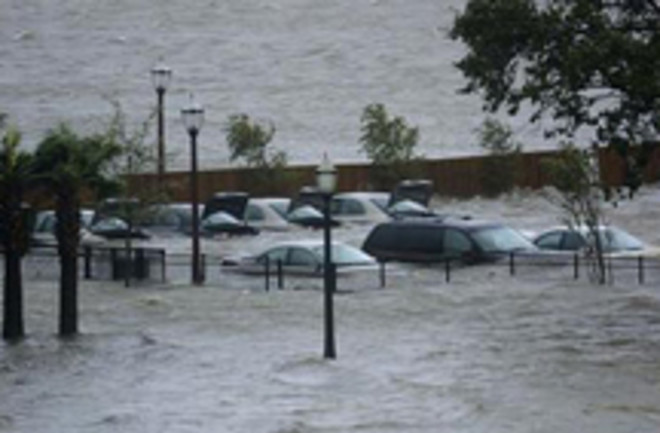 Five patent applications for technology that aims to control the weather bear the signature of a man who knows how to think big: Microsoft founder Bill Gates. The applications made public by the U.S. Patent Office last week describe floating devices that could reduce the strength of hurricanes by drawing warm water from the ocean's surface and channeling it down to the depths through a long tube. A second tube would reverse the process and bring deep, cold water up to the surface. The applications were filed by an entity called Searete, which is part of the company Intellectual Ventures that was founded by former Microsoft executives as an "invention business;" Bill Gates is an investor in the company. Gates is listed as one of the inventors on each hurricane-quelling patent application, along with scientists like the geoengineering expert Ken Caldeira. One of the patent applications

describes how part or all of the cost of building and maintaining the hurricane-killer ships could be raised by selling insurance to coastal residents whose risk would be reduced by using the new system [New Orleans Times-Picayune].

Hurricanes draw their strength from condensation driven by heat. That condensation leads to higher wind speeds. By cooling the surface of the ocean, the plan attempts to sap energy from growing hurricanes [ABC News].

While the proposal may sound fanciful, hurricane expert Kerry Emanuel (who isn't involved in the patent effort) says that an armada of the vessels might be able to bring a hurricane down a notch.

"The bottom line here is that if enough pumps are deployed, it is reasonable to expect some diminution of hurricane power." ... Cutting sea surface temperature by 4.5 degrees under the eye of a hurricane would actually kill a storm, he adds. "This would have to be done on a massive scale, but is still probably within the realm of feasibility" [USA Today].

The technology is not intended for deployment anytime soon, Intellectual Ventures employee Pablos Holman explains on the company's blog. Instead, it's an option that can be held in reserve in case global warming accelerates and produces stronger, more frequent hurricanes.

"This type of technology is not something humankind would try as a 'Plan A' or 'Plan B,'" he wrote. "These inventions are a 'Plan C' where humans decide that we have exhausted all of our behavior changing and alternative energy options and need to rely on mitigation technologies. If our planet is in this severe situation, then our belief is that we should not be starting from scratch at investigating mitigation options" [New Orleans Times-Picayune].