Rebuilding the vocal tracts of extinct creatures could let us hear long-lost sounds: an ancient whale song, the cries of our ancestors. 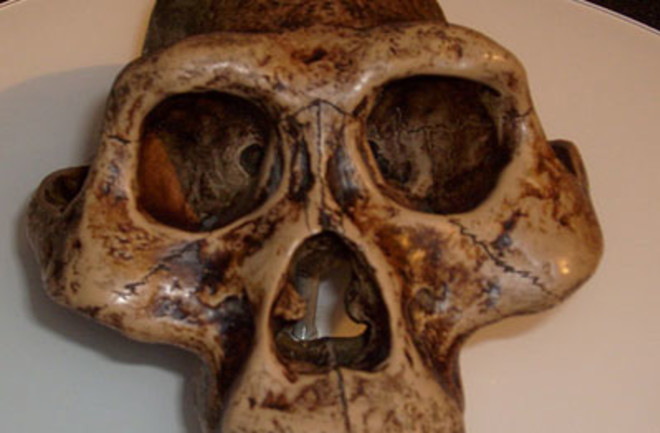 The call of the wild has just gotten wilder. Along with bellowing lions and honking geese, you can now hear woolly mammoths that died out 14,000 years ago, the mating call of a now-extinct Hawaiian bird, and even a 3-million-year-old human ancestor, Lucy. Using three-dimensional imaging and a burgeoning knowledge of ancient anatomies, scientists can now rebuild ancient creatures’ vocal tracts and re-create their sounds.

Take our ancestor Lucy (Australopithecus afarensis), who stood less than four feet tall, swung from tree branches, and ran easily along the ground on two feet more than 3 million years ago. What did that diminutive prehuman sound like as she called to her kin?

Lucy could not speak the way we do, because she most likely had air sacs, balloon-shaped organs that attach to an extension of the hyoid bone, says Bart de Boer, an expert in the evolution of speech at Vrije University in Brussels. In modern humans, who lack air sacs, that bone supports the tongue muscles, enabling a wide range of vocalizations. “Air sacs make sounds louder and lower-pitched, just the way a musical instrument sounds lower and louder when it’s bigger,” de Boer continues. “I was in Brazil recently and heard howler monkeys in the wild. They sounded like scary monsters because of their air sacs.”

Such sounds may help fend off predators, though among great apes they are used mostly to impress each other. Air sacs may also have enabled creatures to make long, repeated calls without hyperventilating. But like bass drums, what they add in force they lose in precision.

On a computer, de Boer modeled the acoustic effect of air sacs and then built an actual model of a vocal tract of a Lucy-like creature, incorporating plastic tubing and a chamber to mimic an air sac. He forced air through the tubing to create various vowel sounds and found that test listeners had a harder time distinguishing them when air sacs were present than when they were not. With this kind of anatomy, de Boer says, Lucy’s vowels would have merged together until they were almost indistinguishable. The easiest vowel sound to make when air sacs are present is “uh.” To human ears, our ancestor might have sounded perpetually bewildered and yet a bit scary: “Duh ... duh ... duh ....”

French artist Marguerite Humeau sculpted Lucy’s vocal tract, which today sits in the permanent collection of the Museum of Modern Art in New York. She is also working on the vocal tract of the woolly mammoth. The mammoth’s white bones look like whorled ice cream, with an enormous tusk jutting into space. “I looked at archived larynxes of the mammoth’s descendant, the Asian elephant,” Humeau says, “along with photographs and scans of woolly mammoths preserved in ice in Siberia. And I created organs—such as the lungs, trachea, and larynx—with vibrating vocal chords, as well as nose and mouth cavities for resonance.” Then she added an air compressor to mimic the lungs sending air through the vocal tract. She also included a subwoofer to emulate the mammoth’s original volume. The result: “Children run from it when it roars,” she jokes.

Humeau’s next installation will re-create the sound of an extinct walking whale and the hell pig, a piglike omnivore that vanished about 16 million years ago. Working with composers and sound innovators, she hopes to have the animals communicate with each other via a computer program that would allow various parts of her exhibit to listen to each other and respond. “It’s almost like raising the dead,” she says. “You get these dark, deep sounds coming at you from millions of years ago.”

A creature’s call is more poignant and present than even the most perfectly preserved bone or tooth. John Fitzpatrick, director of the Cornell Laboratory of Ornithology in Ithaca (which houses the world’s largest collection of animal sounds, nearly 200,000 clips), begins public lectures by playing a “jazzlike, haunting mating call that delights the audience until they learn that it is the call of the extinct Kauai Oo, recorded in the 1970s.” Once common on the Hawaiian islands, the bird was answering a recording played by a scientist. “That bird has gone forever.”

Even more legendary is the call of the ivory-billed woodpecker, which sounds like the rubber horn on a toddler’s tricycle, bleating with the rhythm of a metronome and conveying a certain goofy joy. It was first recorded in 1935 in a Louisiana swamp, “when scientists dragged wagons’ worth of machinery used in early talkie films,” Fitzpatrick says. Cornell researchers are still seeking the woodpecker, which was thought extinct but may have been spotted in 2004. They use audio spectrography, which analyzes birdsong on a computer, to compare calls of woodpeckers in the swamps to that of the elusive bird.

Lately the Cornell Ornithology Laboratory has been working with artist Maya Lin, designer of the Vietnam Veterans Memorial in Washington, D.C. She is crafting a multimedia artwork called “What Is Missing," which includes the sounds of extinct and endangered species. Lin says, “This is my last memorial. I’ll be working on this until the day I die, because I believe we are degrading our habitat so rapidly that we’re in the sixth mass extinction.” The sounds of the Chinese river dolphin, the dusty seaside sparrow, the golden toad, and untold numbers of other animals have left the planet.

“I also showcase the sounds of endangered species, ones we can still save,” Lin says. “We’ve even got the sound of an endangered coral reef, which sounds like Rice Krispies crackling in milk.”

Sounds of the Jurassic

The voices of woolly mammoths and 3-million-year-old human ancestors are far from the only ones scientists have revived. Teams are reconstructing sounds from as far back as the Jurassic, a period when dinosaurs lived.

Walking Whale French artist Marguerite Humeau has re-created the song of Ambulocetus, a mammal that walked on land and swam like an otter. The 10-foot-long carnivore lived 50 million years ago in Pakistan. It produced high-pitched calls that probably traveled great distances. Her sculpture of the creature’s vocal tract is on display now through January 2013 at Cité du Design in central France.

Parasaurolophus Scientists at Sandia National Labs scanned the skull and crest of this plant-eating, duckbilled dinosaur and fed the data through a computer simulation to generate the sound it might have made 73 million years ago. If the dino had vocal cords, it voiced a low-pitched bird call. If not, it sounded more like the drone of a bullfrog.

Jurassic Cricket Biologists in Beijing determined the mating call of a 165-million-year-old male katydid by measuring fossils of the noisemaking apparatus in the insect’s wings. It seems the cricket produced a low-pitched chirp to attract females.