Turbulence on both planets produced these incredibly similar patterns. Which one is which? 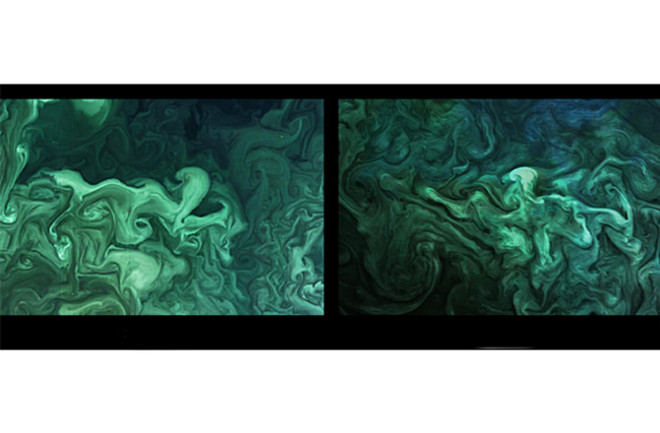 Which of these images shows swirls and vortices of plankton in the turbulent Baltic Sea here on Earth, and which one shows vortices in Jupiter's turbulent atmosphere? Keep reading to find out. (Source: NASA Earth Observatory)

When I first saw the images above on NASA's Earth Observatory site, I really couldn't believe it. The swirls and whorls look remarkably similar, yet one was taken by a satellite over Earth's Baltic Sea, and the other by the Juno spacecraft orbiting around Jupiter, hundreds of millions of miles away.

Jupiter, on the other hand, is a giant gas planet, composed mostly of hydrogen and helium. The word "giant" really applies, as it is twice as massive as all the other planets combined. In fact, Jupiter contains 70 percent of our solar system's planetary material.

Like Earth, it does have something we can call an "ocean," sort of. But it's vastly different from any ocean on Earth. As NASA puts it, "Jupiter's strangest feature...may be a 25,000 mile deep soup of exotic fluid sloshing around its interior. It's called liquid metallic hydrogen."

As I said, one of the images at top was was acquired by the Juno spacecraft orbiting Jupiter — but it did not detect those beautiful swirls and whorls in the planet's liquid hydrogen ocean. Those signs of turbulence consist of ammonia-rich clouds swirling near the top of the planet’s atmosphere.

"The eddies trace disturbances caused by the planet’s fast rotation and by high temperatures deeper in the atmosphere," according to NASA.

Meanwhile, the other image in the pair at top shows a phytoplankton bloom being shaped into beautiful patterns by the Baltic Sea's currents and eddies. In fact, no two phytoplankton blooms are the same, "like the whorls of fingerprints," according to NASA.

Phytoplankton, by the way, are photosynthesizing microscopic organisms, mostly single-celled plants but also including bacteria and protists. And here's another image of these organisms blooming in the Baltic:

A bloom of phytoplankton in the Baltic Sea, as seen by the Landsat 8 satellite on Aug. 15, 2020. (Credit: NASA Earth Observatory)

These blooms appear nearly every summer in oceans around the world, including the Southern Ocean. There, around Antarctica, Lia Siegelman, a physical oceanographer at the Scripps Institution of Oceanography, was interested in the turbulence that causes the beautiful patterning. And then she noticed how similar it was to patterns of turbulence seen in images of Jupiter's atmosphere captured by Juno. Since then, that insight has inspired her and colleagues to work out what drives giant cyclones that swirl at Jupiter's poles. You can read more about that research here.

"The underlying turbulence, the dynamics, is the same," Siegelman said of the patterns seen in Earth's oceans and Jupiter's atmosphere, speaking at the December 2021 meeting of the American Geophysical Union. "Even though the scales are completely different — the vortices on Jupiter are ten times bigger than those in the ocean — we can clearly see that they are generated by the same kind of dynamics."

And Now, the Drumroll

So, have you guessed which of the pair of images at the top of this story is from Earth, and which from Jupiter?

If you guessed that the one on the left shows the phytoplankton bloom in the Baltic Sea... DING! You are correct! Well done.

And now that we're on the subject of comparative planetology, I have to ask: Do you know about the amazing similarities between the Lybian desert and Martian landscapes?

Alas, that will have to wait for another story...