Believe It When You See It: Fish With a See-Through Head 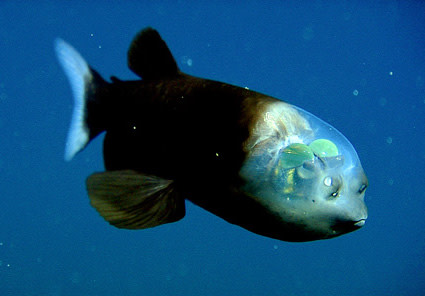 Seemingly straight out of a science-fiction movie, a fish with tubular eyes and a see-through head discovered off the coast of California. Researchers in Monterey Bay have released pictures of the first Macropinna microstoma to be found with its "soft transparent dome" intact. The six-inch "barreleye" fish lives more than 2,000 feet below sea level and spends most of its time motionless, but has eyes that can rotate within its head, allowing it to see whatever is directly above it. From their underwater vehicles, the researchers noticed the fish's eyes were gray when the fish was immobile, but glowed bright green when approached by bright lights. It is thought that the fish uses a green "lid" that sits over each eye to filter out any light that may be present that far down in the ocean, so it can focus instead on the bioluminescence of jellyfish or other prey swimming overhead. Check out more photos of the one-of-a-kind "Barreleyes" taken by the Monterey Bay Aquarium Research Institute. Related Content: Disco: Despite Having No Hands, Dolphins Are the Sushi Chefs of the Sea The Loom: Weird Animals, And Why They Matter