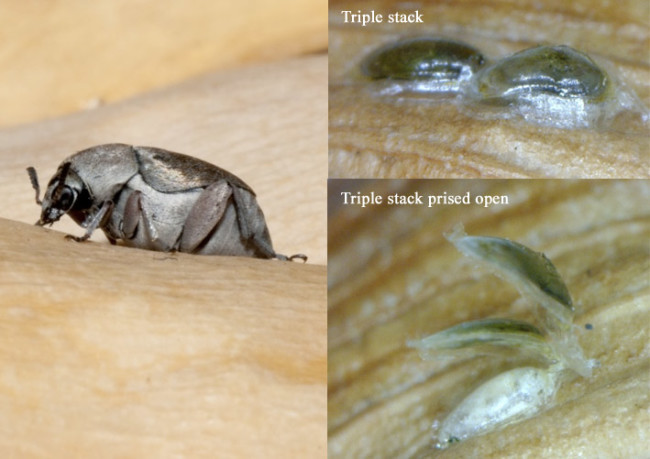 Some parents give their children a head start in life by lavishing them with money or opportunities. The mother seed beetle (Mimosestes amicus) does so by providing her children with shields to defend them from body-snatchers. A female seed beetle abandons her eggs after laying them. Until they hatch, they are vulnerable to body-snatching parasites, like the wasp Uscana semifumipennis. It specialises on seed beetle eggs and lays its own eggs inside. Once the wasp grub hatches, it devours its host. The wasp problem is so severe that around 70 percent of the beetles’ eggs can be infested. But the mother seed beetles have a defence, and it is a unique one. Joseph Deas and Molly Hunter from the University of Arizona have found that they can protect an egg from this grisly fate by laying another one on top. Sometimes, the mothers lay entire stacks of two or three eggs. The tops ones are always flat and unviable. They never hatch into grubs and they completely cover the ones underneath. The top eggs act as protective shields, guarding the valuable bottom ones from the wasps. In the wild, Deas and Hunter found that covered eggs were up to half as likely to be parasitized by wasps as exposed ones. In the lab, around 60 percent of exposed eggs were killed by wasps compared to less than 5 percent of covered ones. If the wasps targeted the top beetle eggs, their grubs fared poorly. Fewer survived, and those that did were smaller and took longer to mature. Deas and Hunter also found that the seed beetle mothers can adjust the amount of protection they provide depending on the risks to their young. They hardly ever lay eggs in stacks, but around half of them do so if they encounter wasps. This is a big investment. The fact that beetles rarely lay shield eggs when wasps are absent is a clue that they pay a steep price for this defence. Laying eggs takes effort and energy. Deas and Hunter found that the more stacks a beetle laid, they fewer young it had over its lifetime, especially if no wasps are around. For the beetles, it’s a fine balancing act between protecting one group of eggs and losing the chance to lay others. There are cheaper ways of protecting one’s eggs. For example, many leaf beetles cover their eggs in faeces. It’s not clear why the seed beetles use valuable eggs instead but it’s possible that their faeces aren’t solid enough to act as a decent barrier. Alternatively, it might actually benefit them to entice wasps into laying into the shield eggs. Doing so harms the developing wasp grubs, so the beetles could help to create a weaker generation of parasites. It is not unusual for insects to go to great lengths to protect their eggs, or to pay a price for such protection. One species of shield bug lays clusters of eggs, with larger ones in the centre that are more likely to survive than the smaller surrounding ones. These act as sacrificial pawns, much like the seed beetle’s shield eggs. The water strider lays its eggs deeper in water to keep them out of reach of wasps, but the greater pressure is more likely to buckle the eggs. Golden egg bugs lay their bright yellow eggs on the bodies of adults, turning them into babysitting bodyguards while also making them more conspicuous. When it comes to parenthood, there are no easy choices, even for an insect. Reference: Deas & Hunter. 2011. Mothers modify eggs into shields to protect offspring from parasitism. Proc Roy Soc B. http://dx.doi.org/10.1098/rspb.2011.1585Images: Beetle by Tuan Cao; eggs by Joseph B. Deas. More on body-snatching parasites