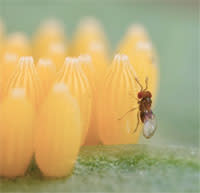 It's not every day that you hear about spy missions that involve a lack of sex, but clearly parasitic wasps don't pay much attention to Hollywood clichés.

These insects merge the thriller, science-fiction and horror genres, They lay their eggs inside other animals, turning them into slaves and living larders that are destined to be eaten inside-out by the developing grubs. To find their victims, they perform feats of espionage worthy of any secret agent, tapping into their mark's communication lines, tailing them back to their homes and infiltrating their families.

Two species of parasitoid wasp - Trichogramma brassicae and Trichogramma evanescens - are particularly skilled at chemical espionage. They've learned to home in on sexual chemicals used by male cabbage white butterflies. After sex, a male coats the female with anti-aphrodisiac that turns off other suitors and protects the male's sexual investment. These chemicals are signals from one male to another that say, "Buzz off, she's taken."

But the wasps can sense these chemicals. They feed on the nectar of the same plants that the cabbage white visit and when they do, the wasps jump her. They are tiny, smaller even than the butterfly's eye (see the image below), and they hitch a ride to the site where she'll lay her eggs. There, they lay their own eggs inside those of the butterfly. Amazingly, the wasps use the same trick for different species of cabbage white butterflies, which secrete very different anti-aphrodisiacs. They can even sense when the anti-aphrodisiacs are wafting among the general scent of a freshly mated female. It's all part of a sophisticated "espionage-and-ride" strategy.

The wasps' tactics were discovered in 2005 by Dutch researchers led by Martinus Huigens. Now, he has found that they parasitise two species of cabbage whites in very similar ways, despite different chemicals and different rewards.

The large cabbage white lays large clutches of 20-50 eggs and uses the benzyl cyanide as an anti-aphrodisiac. The small cabbage white uses a different chemical - methyl salicylate - and it lays just a single egg. For a wasp, the large butterfly is clearly the better investment, as a hitchhike would lead it to a gigantic larder for its young. But the small cabbage white is far more common, making it a worthy target nonetheless. The wasps certainly have no preference for one species over the other.

By using Y-shaped tubes and blowing different airstreams down either arm, Huigens could work out which of two smells was most alluring to the wasps. The smell of mated females was a stronger pull than clean air or the smell of virgins. But if Huigens dabbed virgin butterflies with the right odours, they suddenly became attractive luxury vehicles.

Neither wasp is drawn to the anti-aphrodisiac alone; both need to smell the trigger as part of a sensory milieu given off by a mated female. Huigens thinks that the chemicals themselves - benzyl cyanide and methyl salicylate - aren't actually attractive in their own right. Instead, they change the wasp's perceptions so that the aromatic blend of its host becomes even more attractive.

Of the two species, only brassicae knows how to parasitise the cabbage whites from birth. The other, evanescens, has to learn the espionage trade. Only after hitching a ride on a female butterfly and only after successfully impregnating her eggs will it learn to recognise benzyl chloride with the smell of reproductive success.

It's possible that this difference depends on how picky the wasps are. Evanescens is far more Catholic in its tastes, parasitizing a very wide range of butterflies and moths. For such a generalist, it pays to behave in a more flexible way. What the butterflies do in retaliation is anyone's guess. 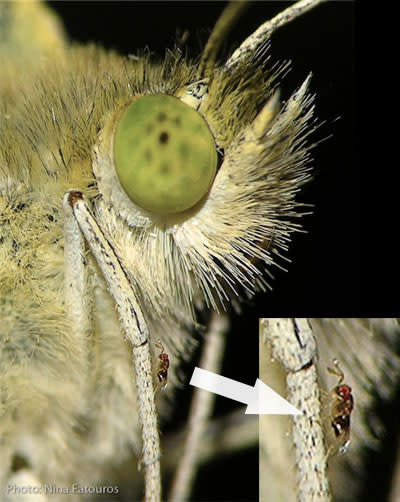