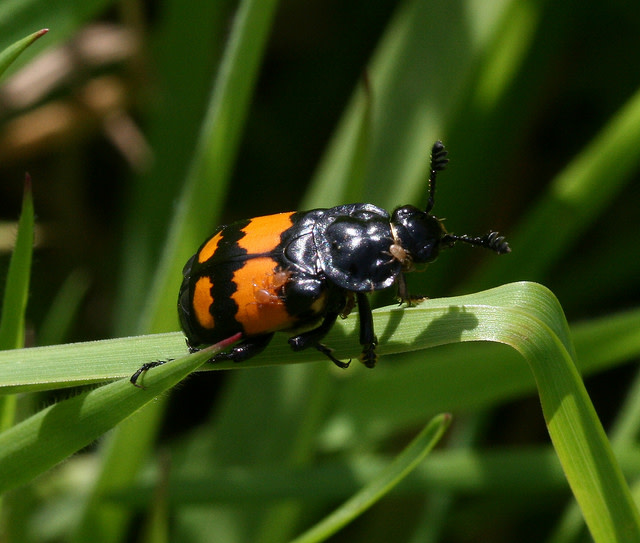 "Not tonight, honey," says the female burying beetle, chewing up a mouthful of mouse carcass before spitting it into the mouth of a begging larva. For the first few days of their babies' lives, burying beetles co-parent. They devote themselves to keeping their squirming larvae alive. That means mating and laying more eggs would be a waste of energy. And to make sure males get that message, females emit a pheromone that turns them off. "It is quite surprising," says University of Ulm behavioral ecologist Sandra Steiger, "and somehow intriguing." Steiger and her coauthors discovered the anti-aphrodisiac in a detailed series of experiments. The burying beetles they studied (Nicrophorus vespilloides) have unusual lives to begin with. First, a pair of beetles claims a fresh animal carcass as their temporary kingdom. They mate and lay eggs in the decaying body. After the eggs hatch, the larvae spend about three days begging their parents for food. Both parents feed the babies pre-digested bites of animal carcass ("mouth to mouth," Steiger says). When the larvae are old enough, they start feeding themselves. And once the carcass has been picked clean, the bugs move on to new dead animals and new mates. It would benefit both beetle parents, the researchers thought, to avoid mating while their larvae were begging for food. Sexual activity takes time and energy, and making new eggs would be especially costly for a beetle mom. The researchers looked for hormone changes in female beetles that were feeding young larvae. They found that these beetle moms didn't lay new eggs when placed on a fresh carcass, as they normally would. And the females had very high levels of one particular hormone (called juvenile hormone III) in their bodies. This hormone is known to control fertility, so it makes sense that it might cause temporary infertility in new moms. The male also needs to know that he shouldn't bother his partner during her infertile period. Searching for a signal, the scientists looked at another chemical called methyl geranate. Female beetles make this while they're breeding. Unlike a hormone, which stays inside the body to do its work, methyl geranate gets released into the air. Sure enough, the scientists saw that female burying beetles gave off the most methyl geranate right after their new larvae hatched. The more babies were in her brood, the more of the chemical a mom gave off. And males, they saw, didn't try to mate with their partners during this time. Finally, the researchers tested their findings by attaching a tiny device to female burying beetles. The device was made of Teflon, Steiger explains, and soaked in synthetic methyl geranate. Like a plug-in air freshener, it steadily released the chemical into the air. While the females' gadgets were giving off methyl geranate, their partners didn't try to mate with them. This showed the substance acts as a pheromone—a chemical that's released into the environment and changes another animal's behavior. For the burying beetles, it's a powerful anti-aphrodisiac. So beetle moms that are taking care of their young dial down their own fertility, and send a "don't bother" signal to co-parenting dads at the same time. The authors say this is the first time anyone's discovered such a system in an insect. But maybe it shouldn't be surprising, Steiger says, "Considering the fact that there are millions of insects outside, and we know already from other insects (such as ants or bees) what kind of fascinating strategies they have evolved."