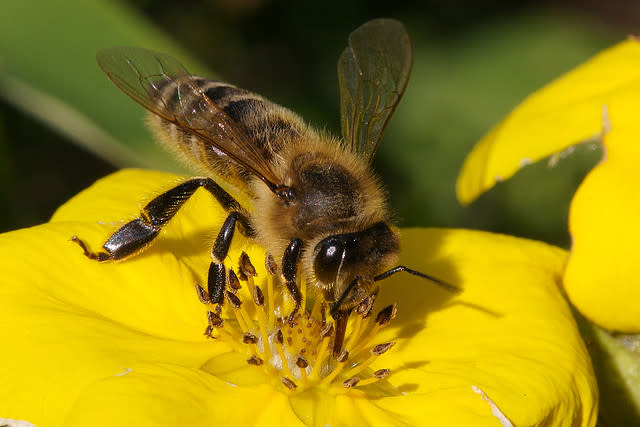 A perennially fascinating question to scientists is how animals get liquids into their faces without cups, straws or hands. In recent years they've cracked the puzzle in dogs and cats, two creatures that often do their noisy drinking near us. Bees, too, sip nectar in plain sight of humans. But their methods are more subtle and mysterious. Shaoze Yan, a mechanical engineering professor at Tsinghua University in Beijing, China, and his colleagues took a very close look at Italian honeybees to see how they drink nectar. The researchers combined high-speed photography with images from a scanning electron microscope, which revealed the bees' intricately built mouthparts. 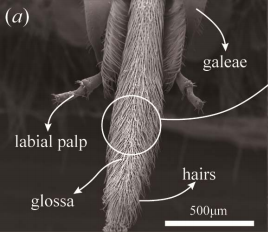 The honeybee's tongue, called a glossa, is about 2.5 millimeters long in this species. The authors note that up close, it "resembles a mop." That's because the glossa is covered in long hairs. When the bee is ready to drink nectar from a flower, the mouthparts surrounding the tongue "form a sucking tube." Then the long glossa stretches down through the tube to dip into the liquid. Video footage revealed that a bee's tongue is not the dumb mop it resembles. Instead, the hairs on the glossa are active. When the bee's tongue extends, the hairs snap outward. First those at the base of the tongue stand on end, then the middle hairs, and finally the ones on the tip. Then they flatten again as the bee withdraws its tongue, slurping up the sweet nectar caught in its bristles. Although standing the tongue hairs out at a perfect 90 degrees would capture the most nectar, the hairs in the study didn't extend that far. The researchers think this is because bees have to balance the amount of nectar in each sip with the drag that the sticky liquid generates on their tongues. Standing up their tongue hairs in this order, and to this degree, might be the most efficient way they can suck up nectar. One lap of a bee's tongue—from stretching out the glossa to extending the hairs like an umbrella and folding everything up again—lasts just 400 milliseconds. It'll take at least a few of those before scientists find the next animal tongue to study. Meanwhile, you can see the whole sequence here: