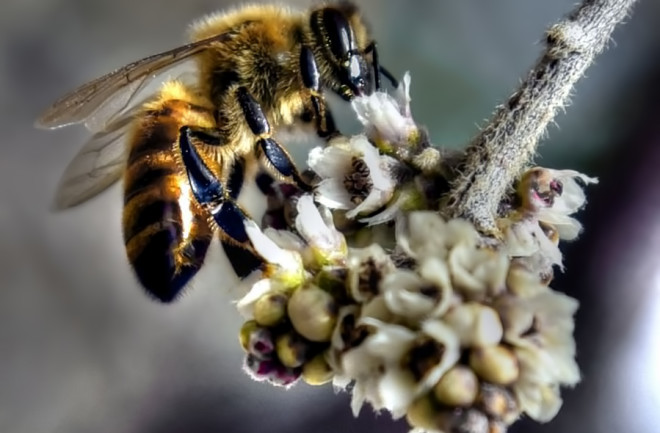 By tweaking a compound from bee venom, scientists may have created a molecular Trojan horse to deliver drugs to our brains. Photo by Flickr user joeyz51 We human beings are quite fond of our brains. They are one of our largest and most complex organs, weighing in at nearly three pounds (2% of our bodies!). Each contains upwards of 90 billion neurons responsible for controlling our gangly, almost hairless primate bodies as well as processing and storing a lifetime's worth of events, facts and figures. So we protect our brains as best we can, from hats that battle temperature extremes to helmets that buffer even the most brutish blows. Our bodies, too, protect our brains vigilantly. Select few compounds are able to cross the blood-brain barrier, a membrane which shields our most essential organ from the hodgepodge of potentially-damaging compounds that might be circulating in our blood. The staunchness with which our brains are guarded internally is usually great—except, of course, when doctors need to deliver drugs to brain tissues. It's not too hard to get some molecules across, assuming they are small and/or fat-soluble, like many anti-depressants, anti-anxiety meds, or notorious mind-altering substances like alcohol and cocaine. But larger molecules, even important ones like glucose, have to be specifically pulled across this divide between our blood and our brains. That means that some life-saving drugs, such as chemotherapy agents targeting brain tumors, need help getting into our heads. And that is where the newest venom-derived product—MiniAp-4—comes in. While the blood-brain barrier is meant to keep harmful substances like venom toxins away from our most precious organ, scientists have long known that some species possess toxins capable of getting through. One of the most well-researched is apamin, a compound found in bee venoms. The bees produce it because it shuts down calcium-dependent potassium channels, making certain neurons easier to trigger (which can lead to tremors and convulsions, for example). More intriguingly, though, is where it seems to be able to attack said neurons; as I note in the eighth chapter of Venomous, studies have found that apamin injected into the bodies of rats can alter the activity of dopamine-releasing neurons in their forebrains—which makes apamin one of a limited number of compounds we know of able to slip past the blood-brain barrier, and thus a promising candidate for a drug delivery strategy referred to as Trojan horse transit. The mechanism for molecular Trojan horses is simple. Just as the infamous Trojan horse ferried hidden soldiers past Troy's well-guarded gates to gain access to the vulnerable city, molecules that are already capable of passing the blood-brain barrier could theoretically be used to shuttle therapeutic ones to where they are needed most. Lots of research effort recently has gone into identifying potential molecular horses and testing their abilities to drag other compounds across the divide. Of course, apamin itself is a toxin—not exactly the kind of compound we want a lot of in our brains. So simply shuttling drugs with apamin was out of the question. But a team of scientists, led by the Institute for Research in Biomedicine in Barcelona's Ernest Giralt, believed they could modify the compound, removing its toxic nature while retaining its brain-accessing abilities.

The chemical structure of MiniAp-4 (depicting its two forms). Figure courtesy of the Giralt lab The compound the team designed—MiniAp-4—debuted by name in a 2016 paper and was presented recently at the 253rd National Meeting & Exposition of the American Chemical Society in San Fransisco. Preliminary research found this derivative of apamin improves upon the original toxin's ability to cross the blood-brain barrier and showed it was able to ferry proteins and even nanoparticles effectively, most likely because it is actively pulled across by transport proteins. But for MiniAp-4 to have true potential as a molecular Trojan horse, what it doesn't do is as important as what it does: it can't be toxic or cause strong immune reactions. And results suggest that, so far, MiniAp-4 is passing those tests, too, with flying colors. The scientists actually did something very simple to take away apamin's toxicity: they cut off the part of the molecule responsible for it. To block calcium-dependent potassium channels, apamin pretends it's a potassium ion using a positively-charged molecular mimic. Remove that mimic, and the compound can't bind to the channels. And luckily for the researchers, cutting away the toxic part of the molecule didn't affect its ability to get into the brain. They then continued to tinker with the resultant compound to make it smaller and better able to stay under the radar of our immune system. What sets MiniAp-4 apart from other potential molecular Trojan horses is that its cyclic, ring-like structure is more resistant than linear ones to our bodies' molecular mercenaries, proteases, which have a tendency to chop up useful peptides before they are finished doing what doctors' intend. MiniAp-4, therefore, should last longer in the body that other promising compounds identified to date. The next step is to really test its ability to deliver drugs. So far, MiniAp-4 has only shuttled fluorescent compounds and nanoparticles. On the horizon are studies in models and animals to determine whether MiniAp-4 can truly deliver pharmaceuticals with similar efficiency. And from there, it will still have to excel in safety trials before it could even be considered for FDA approval, including demonstrating that the compound does not provoke allergic responses in the roughly 5% of people who are allergic to bee venoms. It will be years, maybe even decades, before the compound might make it to market. But for scientists working on venom products, the wait is worth it. Successful venom-derived pharmaceuticals like Captopril have proved to be billion-dollar blockbusters and medical game-changers. If MiniAp-4 can stand the test of time and modern medical scrutiny, it could revolutionize the way we treat brain diseases.