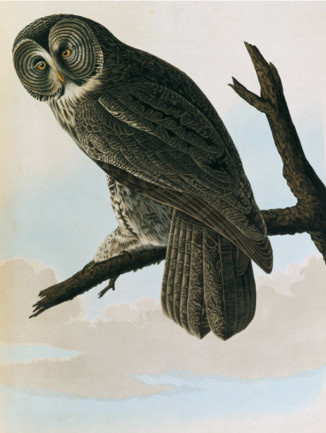 This, the largest North American owl, is a denizen of the dense conifer forests from Hudson Bay to Alaska. There are also small outpost populations in the western mountains south to northern California and Colorado. Its eyes are remarkably small for its large, puffy head and are dwarfed by the large facial discs. A black chin-spot is bordered by white patches that look very much like large white moustaches. Only rarely do stragglers drift in winter to the Great Lakes and New England, probably when there is a shortage of rodents on their home turf.

During the winter of 1978­79, northern New York and New England experienced the largest invasion of these big owls in 90 years. Birders by the thousands added the great gray to their life-lists. 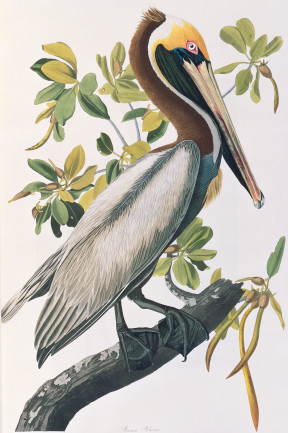 The seriocomic pelicans with their accordion-pleated pouches are the delight of every tourist who visits the beaches of Florida or California. The most popular pelicans of all are perhaps those that make the piers around Tampa and St. Petersburg their headquarters, patiently sitting on their posts until someone offers a handout.

At once profoundly dignified, as birds of such ancient lineage should be, they are at the same time masters of deadpan clowning, particularly when two or three birds contend for the same fish. These pelicans that prefer begging to an honest living probably nest with the hundreds of their kind that resort to the mangrove islands well out in Tampa Bay. 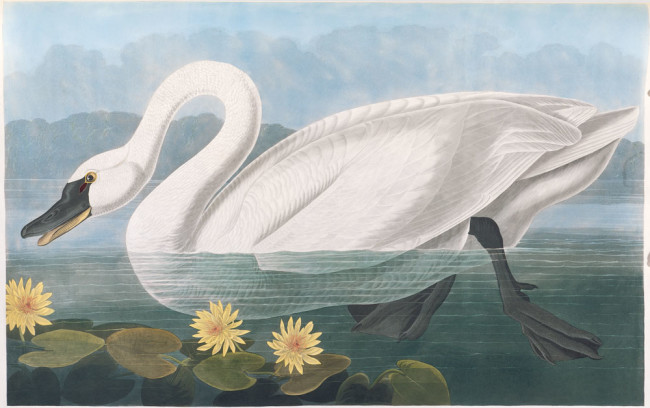 The park swan, which floats about in narcissistic adoration, comes from Europe. But we do have two native swans, magnificent untamed birds that were here when the first anchor chains rattled off the coast. One, the trumpeter swan of the northwest, has become one of the rarer North American birds. The other, the tundra swan, or common American swan as Audubon called it, is doing very well these days.

Tundra swans spend the summer north of the Arctic Circle, north and west of Hudson Bay. Forty to fifty thousand of them might be scattered in pairs and little groups over thousands of square miles of tundra. When ice begins to lock the bays, they start southward in long gooselike wedges, conversing excitedly with whoops and soft trumpeting laughter. Then comes a parting of the ways: one large faction splits off to the west, heading for the great central valleys of California. The rest proceed to the Atlantic, past Lake Huron and Lake Erie, where some rest for a while, then across the Appalachian ridges to the broad waters of the Chesapeake and the bays of North Carolina.

It is a long journey. Occasionally in spring, when returning flocks rest on the Niagara River, some have been carried by the swift current over the falls. 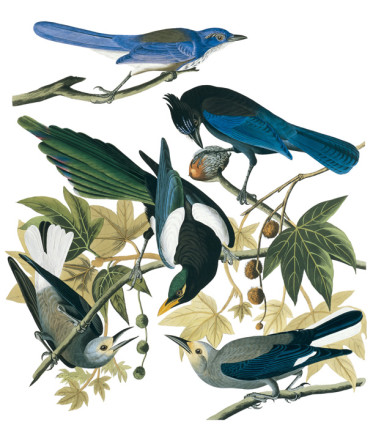 These four western members of the crow-jay family were drawn by Audubon from specimens sent to him by those western pioneers, Nuttall and Townsend. Although Audubon knew the scrub jay (top) in Florida, where there is a disjunct population, he shared the opinion of Bonaparte and others that the western birds were a separate species, differing only in minor details. His specimens apparently came from the Columbia River.

Steller’s jay, the dark bird at the upper right, is a denizen of the western fir and pine forests where it replaces the blue jay of eastern North America. The large bird in the center is the yellow-billed magpie, which replaces the common black-billed magpie in the valleys of California. It is presumed to be a remnant population, descendant of an earlier invasion of magpies from the Old World, probably prior to the last glaciation. It has obviously been here long enough to develop specific differences. Audubon, naming it scientifically after his friend Thomas Nuttall, wrote: “It is to him alone that we owe all that is known respecting the present species.” 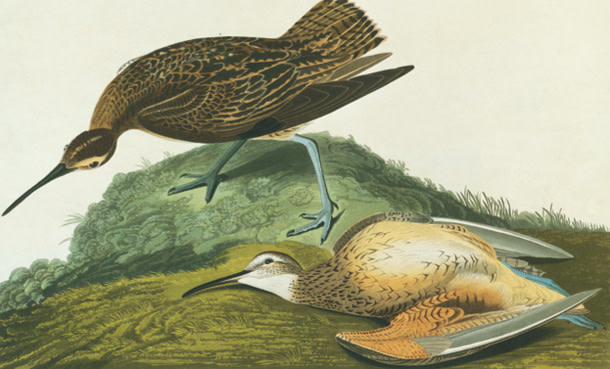 A new printing of The Birds of America by John James Audubon breathes new life into one of the most famous publications in natural history. The bookincludes all 435 of the original hand-colored engravings in careful reproduction. Changes include a reorganization of the plates according to modern phylogenetics and an updating of some scientific names.

The now nearly-extinct Eskimo Curlew was ubiquitous in the 1800s, and they were hunted accordingly. Write ornithologist Roger Tory Peterson and Virginia Marie Peterson in the new edition:

"The pressure on these birds by market gunners and others in the US and Canada was so relentless that the vast flocks that were en route to the Pampas of Argentina, where they were again shot in great numbers, simply melted like snow before the midday sun. For a time it was feared that they were completely exterminated, but in recent years renewed hope has been held out for their survival because of sightings in Texas and elsewhere."

All following captions have been excerpted from the book. 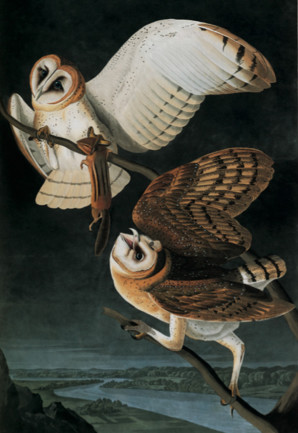 This long-legged, pale, monkey-faced bird is the owl of Gray’s Elegy Written in a Country Churchyard and other English literary works. It is the spook that haunts old barns, belfries, great hollow trees, and caves. It does not give away its presence by hooting as some owls do, but has a shrill rasping snore, or hollow hissing sound “shiiish,” which reminded Audubon of “an opossum about to die of strangulation.”

The two birds shown in this plate were given to Audubon by Richard Harlan of Philadelphia. They had been brought from the south, and were fine adult birds in excellent plumage. The original painting, which is in the collection of the New York Historical Society, was on a white sheet of paper. The gloomy night background was added later, presumably by Havell, the engraver, who often improvised his own background when he felt one was needed. 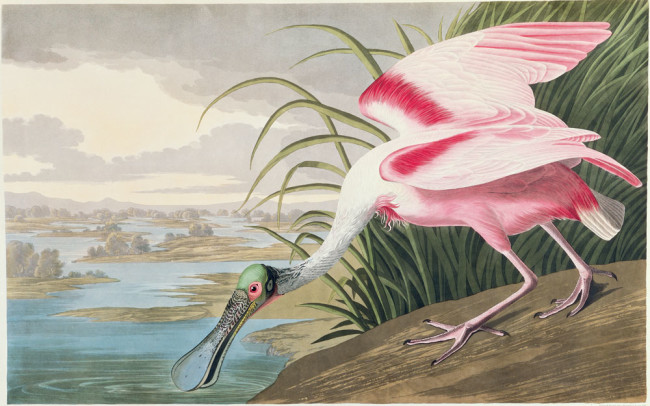 In Audubon’s day spoonbills were numerous in the Gulf states from Florida to Texas, and although their rosy wings were sold commercially for fans in St. Augustine, they did not interest plumage hunters as much as the egrets whose filmy nuptial sprays were in demand. But they were big pink birds that lived with the egrets and so were tempting targets. In the years that followed, particularly after the Civil War, they rapidly disappeared, and before the end of the century not one still bred in Texas and perhaps not two dozen in Florida. If it were not for the fact that some spoonbills still survived south of the border, the species surely would have followed the passenger pigeon and the Carolina parakeet into the void of extinction.