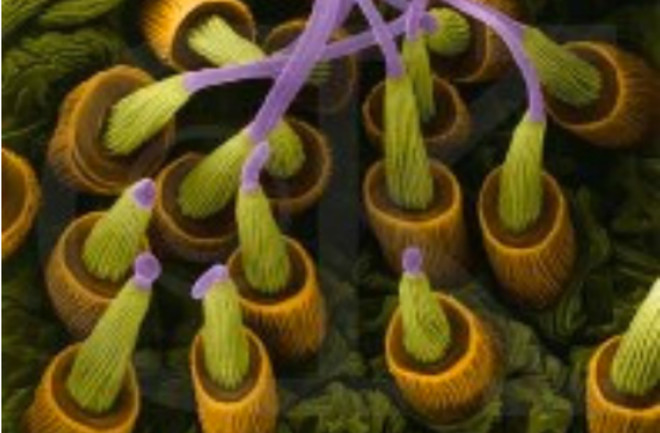 Check out this spiny-backed spider's snazzy silk glands, magnified 490 times. Image credit: Dennis Kunkel/arXiv Gossamer spiders are best known for their bizarre "ballooning" stunts, but it's only this week that we've learned how they pull them off. They disperse by spinning strands of silk into the open air, which allowsthem to float through the atmosphere miles above the surface of the earth and out to sea far beyond the reach of land. These 8-legged kites can apparently survive 25 days without food during their aeronautical journeys. Even Darwin was baffled by their methods---as he wrote in his diary on October 31, 1832, from his ship off the coast of Argentina,

"In the evening all the ropes were coated & fringed with Gossamer web. I caught some of the aeronaut spiders, which must have come at least 60 miles: How inexplicable is the cause which induces these small insects, as it now appears in both hemispheres, to undertake their aerial excursions."

Darwin conjectured that unnoticeable thermal currents could explain the initial launch, but since the strands repelled each other, he assumed there was electrostatic force at work, too. But since the 1830s, most scientists have accepted wind to be the force of choice for directing spider flight. In 1874 a study reported that a spider "patiently waits for a breath of air to waft it across the vacant space," and a hundred years after that, scientists still thought "aeronautic behavior is dependent upon wind currents of specific velocity and direction."

Up, up and away! Screenshot credit: Sate Al-Abbasi/youtube But this week a researcher in Hawaii determined that it wasn't wind's thermal currents that gave the spiders lift. Their flight, he determined, is actually electrostatic. Some of that charge comes from the electrostatic field of Earth's atmosphere. Some charge comes from friction between the silk and dry air. The rest is thought to result from the spinning process and the launch surface itself. As described in the paper published recently in arXiv:

The presence of this charge will lead both to mutual repulsion among the emitted strands, and an additional overall induced electrostatic force on the spider, providing a component of lift that is independent of convection or aerodynamic effects.

As reported in The Physics arXiv blog:

This idea accounts for all the previously unexplained ballooning phenomena. For example, it explains how spiders achieve such a high velocity in conditions of little or no wind. It also explains how such large spiders are able to generate lift. These produce several strands that each acquire charge and generate lift. And it explains why these strands fan out from each other—because their negative charges repel.

Now all we have to do is figure out how to boost the charge so humans, too, can fly via spider silk.