Bacteria From Human Feces is Behind Deadly Disease in Coral 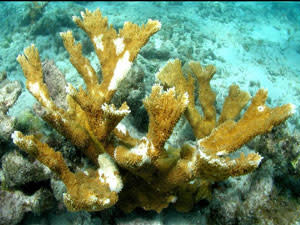 What’s the News: Over the past decade, diseases, pollution, and warming waters have put coral populations across the globe in a dramatic decline. In an extreme case, the population of elkhorn coral

, considered one of the most important reef-building corals in the Caribbean, has decreased by 90–95 percent since 1980, partly due to a disease called white pox

. Now, scientists have traced this lethal disease back to humans

. Human feces, which seep into the Florida Keys and the Caribbean from leaky septic tanks, transmit a white pox-causing bacterium to elkhorn coral, researchers report in the journal PLoS ONE

. “It is the first time ever that a human disease has been shown to kill an invertebrate," ecologist James Porter told Livescience

. "This is unusual because we humans usually get disease from wildlife, and this is the other way around." What’s the Context:

The Future Holds: In 2001, Key West installed an advanced wastewater treatment system capable of reducing the bacterium to undetectable levels, and has not had a new case of white pox since, the researchers told ScienceNOW

. They hope that the new study will encourage communities throughout the Caribbean to upgrade their wastewater management facilities, too. (via ScienceNOW

EnvironmentTo Fight Plastic Pollution, These Researchers Want Your Pictures of Beach Trash
Recommendations From Our Store