Batten down the hatches! A rust-eating microbe called Halomonas titanicae may completely disintegrate the shipwreck within your lifetime. 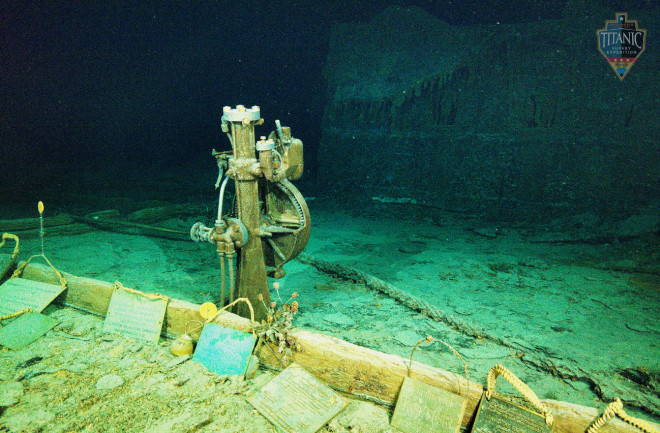 In 1987, veteran submersible pilot and former French naval commander PH Nargeolet journeyed to an ocean location some 330 miles southeast of Newfoundland, Canada — then plunged more than 2 miles below the surface of the Atlantic. At that depth, he laid eyes on the RMS Titanic, exactly 75 years after it first sank and only two years after its rediscovery.

"It was a big emotion, to be honest, and I'm not a very emotional guy,” says Nargeolet, who has since returned to the wreck more than 30 times. “You go from happiness to sadness in a few seconds … It was a really unbelievable experience for me.”

On subsequent trips, he noticed the degradation of the wreck more and more. The rate of decay seemed to vary between any two trips, sometimes targeting one section of the ship rather than another, but it was always at the front of his mind.

Read More: 40 Years Ago: The Titanic Was Found and Lost

On his most recent visit last summer, as a crew member aboard OceanGate’s inaugural Titanic Survey Expedition, the ship was even less recognizable. There’s major deterioration coming from the back of the bow section and creeping toward the front, Nargeolet says. And the mast, which is more fragile, has completely collapsed on the deck. “Step by step, everything is collapsing,” he says. “And we will, I’m sure, next year, see some difference.”

The bow of the Titanic, as photographed during OceanGate's 2021 Titanic Survey Expedition. (Credit: OceanGate Expeditions)

There’s no doubt about that. Some experts hypothesize that the rest of the Titanic will fully disintegrate within the next few decades. And we have bacteria to blame: The minuscule microbes, a hodgepodge that both creates rust and then consumes it, are actively recycling the ship’s parts into the ocean ecosystem at this very moment.

The same bacteria doing this damage may someday be useful in hastening the disposal of the sunken ships and even oil rigs scattered across the world's oceans. And observing the bacteria as they do their thing could help scientists predict the fate of other historical shipwrecks we’d like to keep around. “We know the microbes can do these things,” says Erin Field, a microbiologist at East Carolina University. “But we still don't understand what's controlling those factors and how to predict which wrecks we need to prioritize in preservation.”

Here’s what we do know. Iron-oxidizing bacteria gain energy to live and grow by transforming dissolved iron into an insoluble form of iron oxide — better known as plain old rust. (It’s actually an incredibly difficult thing to accomplish, because iron has so little energy to offer in the first place.) Scientists find these microorganisms in a bunch of different environments: freshwater, saltwater, even in streams and ditches along the side of the road.

But in a deep-sea environment they prefer to nestle in the iron-rich sediments on the ocean’s floor, says Field, who works to identify the microbial communities associated with steel-hulled shipwrecks along the Pamlico Sound and Neuse River systems in North Carolina. “When a wreck occurs and reaches the bottom of the ocean, you get mixing of the water and sediment from that disturbance. That allows the microbes in the sediment to get into the water column and potentially attach onto the new habitat that has arrived,” she says.

The debris field around the Titanic, as photographed during OceanGate's 2021 Titanic Survey Expedition. (Credit: OceanGate Expeditions)

The Titanic, which contained tens of thousands of tons of steel, was a downright feast for these bacteria.

We can see evidence of this feasting from the rusticles, so dubbed because they resemble icicles made of rust, that now litter its surfaces. Some of the iron-rich formations have grown as tall as a person. “The colors are just incredible with the rusticles — the reds and oranges and blues and greens. You don't see that, typically, on other wrecks that I've been on that are shallow,” says Stockton Rush, CEO and founder of OceanGate. “The wrecks don't tend to have quite the color palette that the Titanic does.”

And beyond being just striking, Field says, the rusticles also act as apartment complexes for an amalgamation of microbes. That includes the iron-oxidizing bacteria that make the rust, but dozens of others as well. “They're kind of like living communities, these rusticles,” she says. “They're constantly changing and evolving — much like the icicles that attach to your house that can start to melt and then can regrow.”

One of these bacteria is the Halomonas titanicae. Measuring less than two micrometers in length and invisible to the naked eye, the Titanic’s tiny tenant was first isolated from rusticles on the hull of the ship during an expedition in 1991. But it wasn’t until 2010 that a multidisciplinary team of researchers from Canada and Spain identified it as a previously unknown species. Since then, the bacterium has multiplied exponentially.

That's bad news for preservation, given its appetite for destruction. Rather than make rust, like its neighbors, H. titanicae essentially eats it. According to Field, this bacterium gets its energy from consuming the rust that’s been produced by other microbes or even chemical reactions in the water. In doing so, its waste products are dissolved iron — which, to us, comes across as if it’s nothing at all. "There are parts of these wrecks that will deteriorate and disappear over time,” Field says.

There are many other aspects of the Titanic wreck that researchers still don’t understand, despite it being “one of the most-visited deep diving wrecks,” Rush says. To actually take samples at any deep-sea wreck, rather than simply visit the site, requires expensive and highly-specialized equipment like remotely operated vehicles.

From her perspective, collecting more information is the most important thing researchers can do right now. That’s exactly what OceanGate hopes to accomplish with its Titanic Survey Expedition, a multi-year longitudinal study that matches citizen scientists craving extreme exploration with researchers who aim to capture the ship in more detail than ever before. This coming summer, Steve Ross, a research professor from the University of North Carolina at Wilmington, will lead a second trip to explore the ecosystem around the wreck.

Naturally, humans are not the ship's only visitors. "There is one place on the ship where I saw, maybe 20 years ago, some little pieces of coral starting to grow,” Nargeolet says. “And today they are huge. It looks like a megaphone or something like that, and they're absolutely beautiful.”

Despite the sense of desolation, life still abounds around the Titanic. Just last year, the OceanGate crew took note of odd-looking crabs, shrimps and grenadiers — hulking, bottom-dwelling fish with bulging eyes and impossibly long tails. “The [grenadiers] are very curious animals, they come close to the sub,” Nargeolet says with a laugh. “Sometimes when we were looking for some object or some part of the ship, we were asking them, 'Hey, you know where it is? Show us the way to go there.' ”

The ship, and the field of debris around it, has become an artificial reef of sorts; it’s a phenomenon that also plays out beneath oil rigs around the world. According to Field, these human-made structures often become refuges that a variety of organisms — especially tiny ones, like microbes — attach to. There, they form their own communities and contribute to nutrient cycling in the environment.

“We've even started using wrecks and other kinds of steel structures on purpose for artificial reefs,” she says. “And we really do want to make sure that we can understand the role of microbes to help keep all [those] structures intact, long term.”

It's a kind of reassurance for Rush, who no longer laments the destruction of the famous British passenger ship that slipped beneath the waves. “The Titanic is going to be around for centuries. It just won't be recognizable, at some point. You know, once the bow rail goes, it becomes just a pile,” he says. “But it's going to be an artificial reef way past my death.”